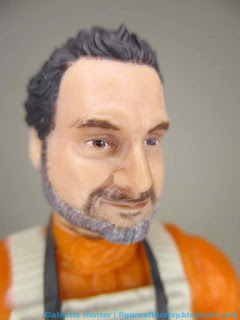 Bio: A veteran of the Rebellion against the Empire, Trapper Wolf now serve as a pilot in the new Republic. He flies his X-wing as part of a squadron which patrols the outer reaches of the galaxy. (Taken from the packaging.) 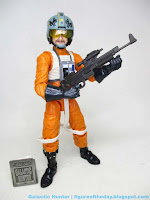 Commentary: A quick sell-through, Trapper Wolf is Dave Filoni's character on The Mandalorian - and with two appearances, he should have a figure! (Hopefully Carson Teva is coming, also 3 3/4-inch equivalents.) This one is, sadly, a convention exclusive, which I think everyone can infer was meant for San Diego Comic-Con International, most likely, which was canceled two years in a row due to the COVID-19 pandemic. A small "Special Edition" is set for next weekend, although it sounds like the toy industry and all of popular culture is largely giving it a pass. So Hasbro sold this one online with a limit of one per customer, and should probably consider another run.

The figure itself is the 2013 X-Wing Pilot Luke Skywalker figure from the very first wave in this scale, but with minor deco changes and a new head.  That means a 47-year-old man's head is on a 26-year-old man's body. The lightsaber hook is there, but now the straps around his waist and legs are white instead of gray. The switches on the figure's chest match Luke's, which qualifies as "good enough" but not necessarily accurate. In his first appearance on the show his suit's orange collar is unbuttoned and is open over his white vest, plus he has a white chin strap and what appears to be white areas in his helmet. 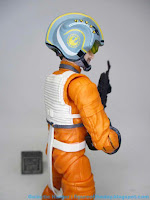 This doesn't mean it isn't neat - Hasbro doesn't sculpt a ton of pilot bodies these days, so whenever they do one it gets used repeatedly. A new body would probably be appropriate here due to Filoni's different build and it could give us a crack at deco improvements, but given you never get a really good look at the man walking around I can also throw my hands in the air and say "well, it's better than nothing." The head sculpt is excellent and the helmet deco looks really cool with his wolf symbol and everything, and it seems to match his second appearance quite nicely. (I guess they changed it a tiny bit.) The blaster also looks just like his appearance when he met Mando on the planet of the ice spiders.

Much like the upcoming George Lucas Stormtrooper figure and other special and weird cameos, we've come to accept that a lot of figures in this line over the past 20 or so years - since Power of the Jedi on - are likely to reuse existing molds because it's sensible to do so. It's not like there are full-body shots from the show to compare to, and as long as it's Dave Filoni's head on a pilot body you really can't make a huge fuss about them needing to make a series of changes. More recent figures have far more forgiving joints when it comes to posing, so I hope there's a Pilot 2.0 body in the works for Biggs or other pilots. But this figure? He's fine. There are no special improvements, he meets expectations and you'll likely be disappointed if you missed him and are a The Mandalorian or pilot completist.