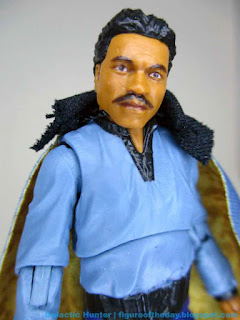 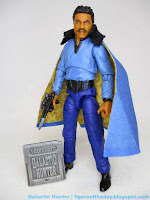 Commentary: This is a curious one - it's been over a decade since we got a new Lando Calrissian 3 3/4-inch action figure, and this one takes some notable swings - it's a hit, too. The all-new mold seems to be largely derived from the 6-inch The Black Series figures with very similar articulation and similar if not identical wrinkles in his outfit. The cape is made with a new process, and the hair is a separately molded piece. In short, it's a perfect new figure and shows just why we should be excited when Hasbro finally makes new molds.

The head sculpt looks a lot like Billy Dee Williams, and the printed photoreal face is excellent. The mustache and eyebrows are good and the eyes are excellent - at least, with my eyes they're awesome. The macro lens and the ring light bring any flaw into focus when you blow it up, but that's unfair - this is meant to be seen by people, not cameras. The hair is perfect, a separate piece attached to his head so there's no weird "doll hair" hairline paint issues. Could you ask for more? Sure. But you won't get it, this is probably the head sculpt we'll see for years to come in any newly made figures of any size.

For better or worse, articulation is very close to the 6-inch figure. You get bend-and-swivel wrists, the weird mid-torso cut joint I just can't stand, a fantastic neck joint, old-style non-rocker ankles for his boots, and perfectly good hips and knees. The knees are typical bend-and-swivel joints, unlike the double-jointed knees of the 6-inch figure. The thigh cuts are great, and the hips aren't bad - they're those weird ones with 2 joints where they attach to the pelvis. Everything seems to work fairly well so he can sit in the Millennium Falcon - you can even pop off the head and remove the cape!

The cape itself is interesting in that it's one of the thinnest and most ornate yet - I'm not sure what's even going on here. The blue trim is great and the lining is more detailed than the 6-inch figures. I think I can safely say that for a 3 3/4-inch figure, the level of detail is stunning given how thin it is, which makes it better for a figure of this size. The cape is pre-folded and stitched in a certain pose, which helps him look more like the movie - but it's not perfect. It's a huge improvement and a big step forward, but it doesn't bunch up in the front precisely like the photo - it may be a technical impossibility, but given how they did the string for the neck and the lining, perhaps nothing is impossible anymore. As costs go up, Hasbro can put a bit more money in some elements and give us a fancier, better figure for our money. The blaster has a silver barrel and some weathering, making it one of the best in the scale. The communicator from the 6-inch figure is sadly absent.

So far, this is the figure I see the most often from this wave (and possibly this whole year.) Lando tends to be a slower seller, but he's also one of the very best figures Hasbro has put out this year - it's as close to perfect as we've seen so far and is an absolute upgrade over every previous release. The plastic cape vs. cloth cape argument may go on forever, and you may be happy with the previous releases, but I can't not love this one. The 2004-era Vintage figure was good, at $10 with swivel elbows, but at $14 and 17 years later this one is just so far beyond it I can't imagine why anyone wouldn't welcome an upgrade. Get this one. Get two! Keep one in the Falcon. It would stun me if Hasbro makes a better sculpt in the next 10-20 years, unless they just move the torso joint to the belt. That I could buy. But otherwise, this is likely as good as he's ever going to get and it's excellent.

It's a great figure, but it should have only been packed 1 per case, found one in stores, and have 3 on the way, I'm hoping to do a head swap with the Solo Lando figure, while keeping at least one on card.