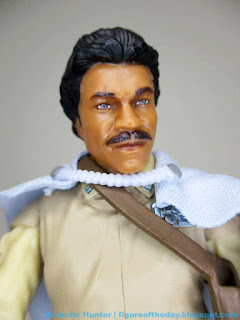 Bio: Lando Calrissian served as a general in the starfighter attack on the second Death Star, showing off his superb piloting skills by guiding the Millennium Falcon into the Death Star superstructure. (Taken from the packaging.) 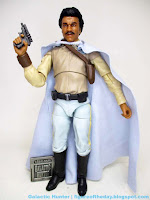 Commentary: With this release, General Lando Calrissian ticks the last Kenner box - now all the 1980s Lando figures exist in this 6-inch scale! I'm not sure how long ago this was developed, because parts of it seem like it could have been a design shelved from a few years ago. While it absolutely looks like the outfit from the movies, some of the niceties of more recent figures are missing - for example, the shoulders that can pivot forward? They're not here. The mid-torso cut (rather than a belt cut or something more subtle) is back, too. I wouldn't be shocked if the design work was mostly done in or around 2018 -but since he has an awesome cloth cape and great face paint, I won't complain too much.

Complete with working chest holster, the tiny blaster easily fits in his hand or in its place. It's not too big, and it looks great. Lando's cape is thin and despite being cloth, has a plastic "chain" which actually looks amazing. Hasbro managed to make the gear exactly what it needed to be. 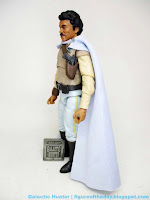 Everything about the uniform seems about right - Hasbro even sculpted the belt as a separate piece, which does look a bit better than just painting some brown on the pants. The boots are good, the pants have their yellow stripe, and you even get rocker ankles. The articulation is fine - not up to late 2019 standards, but fine - with elbows that bend nicely and legs that swing forward, but not well enough to fit in a cockpit were one ever made. His head looks a lot like Billy Dee Williams, with painted on hair - not a separate piece, as we sometimes get - and everything seems to be painted on straight. It's a good recreation of a good costume, but things like the mid-torso joint are going to haunt me.

He's fine. He's not amazing, but he meets expectations and puts all the major costumes to rest - Hasbro could still do the smuggler's costume from the end of The Empire Strikes Back but I wouldn't hold your breath. Other than the articulation not being as integrated as nicely as I would like - and maybe hte costume being a bit more wrinkly in spots - I'd say it's good enough, and you should get it if you see it at a fair price. Maybe we'll even get Nien Nunb some day.

Email ThisBlogThis!Share to TwitterShare to FacebookShare to Pinterest
Labels: Lando Calrissian, Rebellion, Return of the Jedi, The Black Series 6-Inch