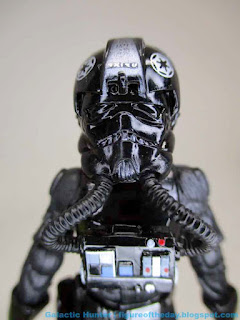 Bio: TIE pilots served in the Starfighter Corps of the Imperial Navy by piloting the various TIE Series starfighters. Distinguished by all-black flight suits and bulky, fully enclosed, vacuum-sealed helmets, the Galactic Empire at its height produced millions of TIE pilots and generally considered them expendable assets. The TIE pilots formed the elite of the Imperial Navy's Flight Branch. (Stolen from Wookieepedia. Packaging has no bio.) 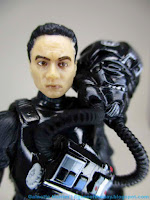 Commentary: The current era of The Vintage Collection straddles the fence between "awesome, incredible" and "I can't tell if this is new or not." Occupying the "just different enough to make you mad" space, this particular TIE Fighter Pilot is a mishmash of releases - the helmet deco (and indeed suit deco) are identical to the Vintage pack-in Imperial TIE Fighter Pilot [FOTD #2,589] from 2018, but the head under the helmet is different. Aren't you sorry you asked?

For ultimate completism sake you'll want this, but if it's arguably interchangeable with the Walmart The Vintage Collection TIE Fighter pack-in pilot. With the helmets on, they're virtually identical with the lettering and silver stripe down the helmet's crest. The buttons and switches are colored the same, with the same outlines, although some may be sloppier than others because that's life.

I'm always riding for cool variations and the 3 3/4-inch line, but the fact that I had to squint at this figure and compare it against a parade of existing figures to realize that it's different - and how it's different - shouldn't be the way things are in any collector's line. If it's the same? Awesome. If it's clearly different and marked as such? Fantastic. It's also worth noting that the TIE Pilot is a veritable ship of Theseus, as this figure has been upgraded with new parts since its debut in 2004. It's not super-articulated, but it's good enough to fit in the pilot's seat and the holster for the blaster is adequate for when it was retooled over a decade ago. An all-new TIE Fighter Pilot mold could be an exciting prospect, but as a repaint of a retool of a repaint of a retool, it's great for anyone who needs a Pilot. But I assume something better will, some day, see production. (But I also thought that in 2004, and we're still dealing with that one's offspring.) 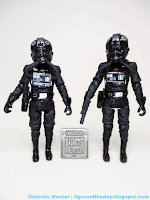 Since this is the "photoreal" era, here's what matters: the 2018 pack-in? Unpainted black head, glued-down helmet. The 2021 carded version has a very pale skin tone with a complexion and deco that may strike you as "stoned/zombie" in appearance. The details are sharp with glossy lips and a bit of eyeliner, but one of the eyes on mine seemed a little uneven. It's a little peculiar in 2021, the helmet deco is fine but the human heads have evolved into such incredible things that seeing this I can't say that it's good. It's OK. For carded collectors, it just plain doesn't matter. But for those who need all the differences, this waxy, barely-different pilot is a variation you'll want. (And carded variant collectors, you'll want this.)

I you don't have a TIE Pilot, it's great! If you missed the 2018 TIE Fighter exclusive from Walmart, it's a good pilot substitute - heck, it's better! But if you've been doing this for 20-40 years and are looking for corners to cut, this may not be different enough to have been worth your creds.