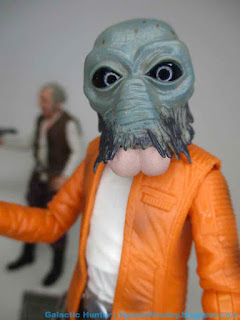 Bio: A burly Aqualish thug, Ponda Baba smuggled spice for Jabba the Hutt alongside his friend Dr. Cornelius Evazan, a murderous former surgeon Ponda had rescued from a bounty hunter. (Taken from the single figure's packaging.) 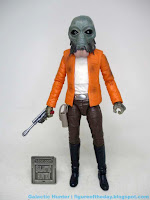 Commentary: It will not surprise you - but it may disappoint you - to find out Ponda Baba has a Rogue One-inspired sculpt on a Luke Skywalker (Yavin Ceremony) body. In the interests of keeping costs down things like this are inevitable, but given just how much of this line is repaints - all those Carbonized, Credit Collection SKUs plus trooper and droid variants - it's kind of a pity to see a scrawny body like Luke Skywalker's reused here on a burly bruiser like Ponda Baba.

In 1979 Kenner gave us Walrus Man, a wildly wrong take on this character that colored our perceptions for decades. Kenner revised it in 1997, and future figures tended to get closer and closer to what we saw in the movies. This guy just doesn't quite seem to have it right - the torso is too narrow, teh arms are too skinny, and the sad thing is this could be the last The Black Series version of the character we get for quite some time. Were this a figure whipped up in a hurry to flesh out the line, or one of the first releases, I'd shrug and say "well, that's how you get product to market." Given that Hasbro double-dipped on this item as both a standard and a convention release, and before that Ceremonial Luke was also done as an expanded deluxe release and a single release, Hasbro could've sprang for some more new parts here. I shouldn't be able to pick up a new figure like this and immediately go "...hey wait a minute, is this just Luke again?" As only the second cantina alien in this line since its inception in 2013, I always assumed the delay was because they wanted to get the sculpt right, or it was just on the backburner for some reason. If I knew it was just going to be a head swap, I think I could have kept waiting. This version of Ponda Baba has a whiter shirt - as opposed to off-white - which makes this closer to his appearance in Rogue One. That checks out given his slightly shaggier beard, too. The head sculpt is great with big glossy eyes, dirty and freckled skin, and the mouth which could be the subject of jokes for years. The head was a very good recreation of what we saw in the movies, and the hands are very good recreations as well.

As to the body, it's Wormie. The jacket may share some similarities to what Ponda wore in terms of the unique ribbed sleeves, but the pockets are all wrong and a lot of other details are different. These are things they got more or less right on the 3 3/4-inch figures, which is what makes this sting a bit - the 6-inch line is meant for adult fans and collectors. This set was sold as an online convention item at a premium price, and what we got failed to meet a pretty low bar for success in a line like this one. It's possible each collectible crew is working from a different set of reference points, but things like the clear Holiday Special jacket do look different from this one. After all, there's what appears to be a rank badge over the Ponda figure's left breast - he didn't have this in the movies.

You're probably going to buy this because there are no alternatives of merit in this size. After seeing Plo Koon and Kit Fisto reuse parts of Obi-Wan and Anakin to few to no fan complaints, I assume we're going to see more shortcuts like this as time goes on. With Marvel comic figures, it's standard practice and sensible given the similarities in build. You could use Spider-Man for dozens of other figures. For Hasbro's flagship Star Wars figure line these days, it's just disappointing. It seems like nearly every tooling may be up for reuse given the metallic repaints, but seeing it for regular characters was a bit of a downer. If you're not all-in on 6-inch, just hug your 3 3/4-inch Ponda Babas tightly and be glad that good ones already exist for you to love.

Collector's Notes: I got mine from Hasbro Pulse in the PulseCon exclusive boxed set.

Not being a "sixer" I was dumbfounded by the seemingly added irises in the main story close-up photo. After going into the review I then realized it was just the ring-shaped studio light. Ha.