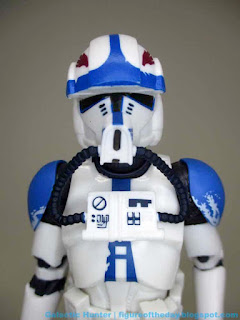 Bio: "Hawk" was a clone trooper pilot who served in the Galactic Republic Starfighter Corps during the Clone Wars. Bred from a human template, the bounty hunter Jango Fett, he often performed escort, drop-off, or extraction duties for Jedi General Anakin Skywalker's 501st Legion. (Taken from Wookieepedia. Package has no bio.) 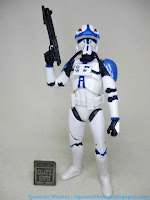 Commentary: Despite being part of an anniversary line with 2008-2009 The Clone Wars packaging, this Clone Pilot Hawk is actually the Hasbro action figure debut of this character. (There is a Fighter Pods figure and a LEGO figure.) It makes use of a body that's been used for nearly seven years, with the double-hinged knees and elbows and not the newer bend-and-swivel joints. It has a new head. Is that enough? Well, yeah.

Since that's what's new, let's focus on the changes. I love the blue highlights on the armor, and the scuffs look pretty good too. The 501st legion blue markings are great, but the white soles on the boots are a little disappointing given this figure had a slight price increase and not much newness - and only one blaster. He has no problems holding it, and the figure stands well. The joints are the same as always, a little stiff and ratchet-y. The good news is this means he's sturdy and stiff, which may limit your action poses. Of course most of you will just have him in the package, or stand on a shelf, so once you open it you won't necessarily make much use of them anyway.

The helmet, hoses, and chest components are new and pretty great - they made a decent translation to "realistic" with few compromises. The animated designs for the chest box show more black and less visible white space, which gives this one a bit less dynamic look. The animation model looks more lively with black behind some of the sliders, while this one leaves the area near them largely unpainted. Still, it's nice to see them sculpted there, with most of the landmarks present. They're just not sized or colored in a way that "pops."

It's another Clone, with no vehicle to put in. (And, sadly, no 3 3/4-inch counterpart yet.) As part of a complete set, you can't miss it - but if you're skipping the cartoons, you won't need this one. It's good, it's a clever retool, and it's not too expensive on the secondary market. But is it exciting? If you're a 501st fan, it's a great addition to your army - otherwise it's another clone to shelve.

Collector's Notes: I got mine from Target. And I hope I can find Echo and Obi-Wan some day.