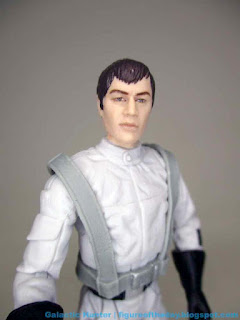 Bio: AT-ST Drivers control the two-legged transports used by Imperials in both the Battle of Hoth and the Battle of Endor. (Stolen from Walmart's ordering page. Packaging has no bio.) 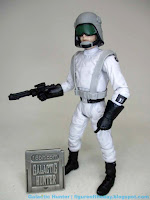 Commentary: This AT-ST Driver sat next to my desk for months before opening it - I just wasn't in a rush, and since Walmart didn't sell out if it, apparently you weren't either. This figure is a redeco of a retool - the mold is over 10 years old, but this particular version uses a Richard Marquand head - which debuted later as a Kmart exclusive - and gives it photoreal paint. It's pretty essential as the only "vintage" carded AT-ST Driver, and if you take the helmet off it's a really nice Richard Marquand head you can use for your Jagged Edge making-of dioramas.

For a modified figure that's over 10 years old, this is excellent. It's a super-articulated body (pre-weird hip joints) so you get 22 points of articulation. The sculpt is nice and clean, but what I love about this one is that even though the legs are sculpted apart when he's standing, they swing forward and get closer together. He just slides right in the AT-ST's seat with zero fuss. That's a perfect pilot figure right there! It helps that he also has swivel wrists and jointed elbows, so you can get some pretty good poses out of somebody whose sole purpose is to occupy a seat in a small box on stilts. This is a well-made toy figure that is also a nice figure for collectors.

As mentioned before you could buy him at Kmart in a 2-pack, but this one is an upgrade - the head has pretty good photoreal paint that seems to shave a few years off the director of the third movie. He looks good! Not much else to say - but if you disagree, you can leave the helmet on. It slides off and on easily with the chin strap not getting in the way, which is in and of itself a notable feat. Sometimes it's a nuisance, here it's a joy.

Considering that this is an older figure brought back to market, it holds up remarkably well. It does everything I want a pilot figure to do, plus it has a secret cameo by the film's director. There's even an Imperial cog on the shoulder. What more could you ask for? Vintage packaging - and you got that too. If for some reason you missed this one, and he's still available, he's worth the $13. There's probably little chance of them making a more perfect and easy-to-use pilot for your vehicles, and it's a great example of them looking in their tooling library and saying "this is as good as it's going to get."