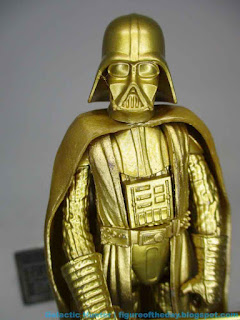 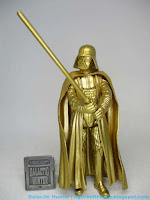 Commentary: When I first saw The Rise of Skywalker line, I knew things were going south. This Darth Vader figure is evidence of what's more or less wrong with the series over the last few years - on one hand, it's an easy-to-make gold repaint of a 2016 Rogue One mold. But Hasbro did a whopping nine of these packs, some of which are better than others. There were a handful of silver figures from about 2002-2006 too, but I think that grand total was maybe six figures. Walmart sold 19 golden figures in a couple of months, and if you like the whole gold thing, they're neat. Otherwise you can add them to the pile of Carbonized Metallic figures, Holiday Edition figures, Prototype Edition figures, and other things that are more in line with typical collector's edition fare - things Hasbro largely eschewed for the bulk of the toy line's history. Kenner did as well - repaints for the sake of repaints were rare, usually there was prior art or a story purpose for those droids, clones, or other repaints. (Even the 2002-2010ish holiday edition figures largely had precedent in existing holiday cards.)

This is a good set to leave in the package. (The Stormtrooper's neck peg immediately sheared off. More on that when that review comes.) Vader's joints are nice and smooth, but the gold paint is already sticking to itself. Limbs are sticking to the cape, and I assume the lightsaber's gold paint will stick to the hands over time - matte silver paint does not typically age well. I do love how it highlights just how much work went into the figure's sculpt, but curiously the gold also highlights the problems. Darth Vader's nose has an indentation that is pushed in too far, and it's made painfully obvious now that the black, shadowed area is brightly colored. You'll love seeing the folds and wrinkles in the costume, though - but I assume this figure is going to look terrible with any sort of touch as the cape flexes and joints move over time. I already see parts on the figure where the cape stuck to the body, and you can see pock marks of where they got stuck together.

I generally don't have a big problem with weird figures, but this one came out at a time when we were being told "kid line figures" weren't viable and it seemed Hasbro was intent on producing lines that were redundant, repetitive, and generally lacking in important things like the title character of a movie. Along with the Celebrate the Saga multipacks, these gold figures were the end of what should have been a much better cap on a mountain of toys. Hasbro doing hundreds of dollars worth of "just like the figure you have, but splattered/shinier" figures at once has made the hunt less and less enjoyable. It's one thing to drive around to get a figure you really wanted, but it's even worse when it is most likely something you didn't want in the first place - but recognize that if you don't have it, your collection may forever be incomplete, and then you're staring down if this matters to you or not. And who wants to have that level of introspection while shopping for toys? Not me, that's for sure.

For the die-hard fan who never opens a figure, I think this is a good set to leave packaged. I would emphatically advice against getting it to open unless your entire design on this collection is to open them, place them on a shelf, and never, ever touch them again. The gold paint looks cool but it's just not going to age well. It is, however, interesting in that it's one of very few Hasbro figures completely coated in paint - typically there are elements with exposed bare plastic. The only non-silver, non-gold 2-pack exceptions might be the various vac-metal C-3PO figures we've had over the years and those by and large held up better than Vader has after a mere fifty seconds out of the package.

Collector's Notes: I got mine from Entertainment Earth. These sets were initially Walmart exclusives.