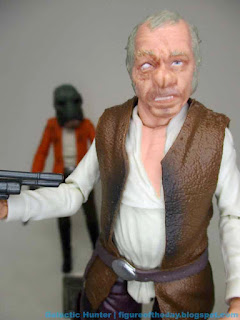 Bio: A grubby, scarred smuggler from Alsakan, Cornelius Evazan was once a promising surgeoun, but became notorious for conducting cruel medical experiments. (Taken from the single figure's packaging.) 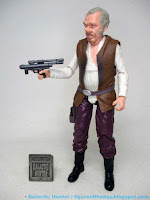 Commentary: Did you realize it's the fifth anniversary of Rogue One this year? It's true! We got a bunch of repaints and retools to celebrate, but this Dr. Evazan isn't as Rogue One-y as his pal Ponda Baba is. (More on that in a few days.) But if this figure looks familiar, it's because Hasbro did an exquisite job at hiding that his limbs are all recycled parts - a new head and torso is what you'll notice first, but eagle-eyed fans will quickly see D.J.'s pants (from The Last Jedi and Luke Skywalker's arms (from the 2014 Jedi Knight figure.) Since there are very few good reference shots of the original costumes, Hasbro and DisneyLucasfilm probably assumed most fans would never notice - and they'd be right. But if you've been collecting figures for decades, you'll notice similarities to other 6-inch figures and differences from previous Dr. Evazan costumes.

Shot mostly in close-up and in the dark, Dr. Evazan's most notable elements are his head and torso - you can't miss the disfigured head, the brown worn vest, the belt, or the open shirt. These sleeves are tighter, as opposed to the more open ones in most reference pictures or The Vintage Collection figure. The body is right, the upper body colors all match nicely, and hands are hands. The face looks fantastic with the fancy photoreal paint, arguably more convincing than stills of the make-up from the movie. The hair looks closer to the 1977 film, a little whiter, a little less poofy than what we saw for a second in 2016. 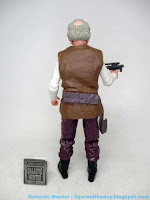 The legs are a little redder, as opposed to the brown or grey of previous figures. Which is more correct? I have no idea. These see a little bulkier, but his boots more or less match previous Hasbro figures despite being D.J's lower extremities. The double-jointed knees are a dead giveaway that this was made of older parts, but it more or less works. The legs seem pretty thick compared to the scrawny arms, but that's what happens sometimes. I would have preferred a completely new figure - this set was really expensive - but he's sturdy. The figure stands with no problems at all, and everything looks good when you look at it as a whole rather than a compilation of eight years of pre-existing parts.

Up until 2021, the only Cantina alien Hasbro ever gave us was Greedo way back in 2013 - it's great to add to the mix, and this one made a great choice for so many reasons. I doubt we'll ever see a 2.0 in this scale, and that's just fine. I would've loved more paint on the facial scarring, but it could have been visual overkill. He's plenty creepy as it is, so if you see him I think you'd probably enjoy having him to add to your less-than-huge original trilogy 6-inch figure collection.

Collector's Notes: I got mine from Hasbro Pulse in the PulseCon exclusive boxed set.