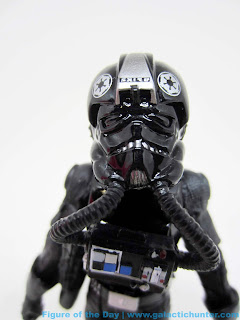 Bio: TIE fighter pilots, also known as Imperial Starfighter Pilots, were an elite class within the military of the Galactic Empire. They piloted the TIE/ln space superiority starfighters, one of the Empire's most recognizable symbols of power.  (Stolen from Wookieepedia.  Packaging has no bio.) 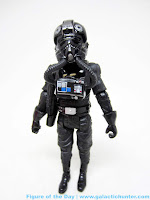 Commentary: This one is frustrating.  The Imperial TIE Fighter Pilot (and his vehicle) have been upgraded bit by bit over years to the extent where I think Theseus would be proud.   The TIE Fighter has evolved since 1978, with Kenner (later Hasbro) slowly upgrading the wings, cockpit, interior, windows, laser cannons, and each and every piece to the point where this TIE Fighter may share the wing eject mechanism from the 1978 original, but noting else.   Similarly, this TIE Fighter Pilot builds on the 2004 Saga figure, which has been given upgrades like a removable helmet, blaster holster, ball-jointed shoulders, elbows, and wrists as time went on.  This one changes the formula by leaving the "clone" head unpainted and gluing the helmet down to it.  For whatever reason, Hasbro has elected to not give this figure ankles over the past four decades. 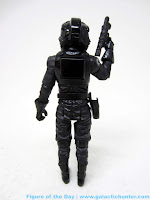 What makes this figure unique are the glued-on helmet on the human head, the distinctive silver stripe on the helmet, and it matches the Decipher CCG "Reserve Pilot" card.  I'm not sure if he got a name later.  So this guy is distinctive and all, so if you need every flavor of Imperial TIE Pilot this should be added to your list.  At $80 it's kind of pricey, especially when compared to the Sail Barge or Skiff or even the recent Rogue One tank.