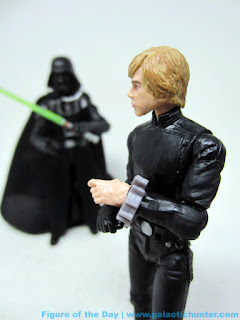 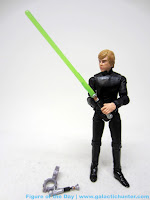 Commentary: Previously released as "Jedi Knight Outfit" and "Endor Capture," this version is Luke Skywalker (Endor) and that's what you look for on eBay.  It's still VC23, but the cardback has been revised and the figure's face is different.  The figure is largely identical to the previous release except for the head, but it's a good one.  While Darth Vader from this wave is a 14-year-old mold, Luke is only about 9.

This is a good one - Luke has bend-and-swivel wrists and those lateral-moving hips, which were a big deal back in 2010.  Luke is skinny with a head that seems a smidgen wide, wearing the outfit you saw on the Death Star at the end of the movie.   He has glossy boots, one black glove, and the right hand as a sort of weak thumb on my sample.  This version has a lightsaber hole on his belt, which some of the 2010 figures had - but not all.   If you didn't get the Luke in 2010, you probably should.  While a new Jedi Knight Luke is coming, it's a Jabba's Palace one - and not this outfit. 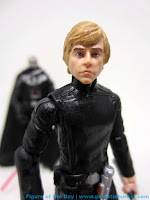 The reason this figure is interesting is the head.   The sculpt is a little rounder than I would like, but the deco is better this time.  The eyes have a subtle painted outline, the lips are painted, and the two-tone hair has a bit more contrast this time.  From a distance it looks a little bit better than the 2010 figure, thanks to slightly darker eyebrows and higher-resolution printing on the figure's head.  It's an improvement, although I can't say it's essential if you're already happy with the last one.   It's essential for me though - I can't say no to an improved head.  If the price is right, this is a worthwhile wave.