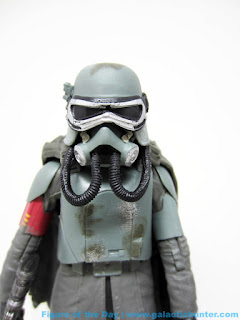 Bio: After getting kicked out of the Imperial Academy, Han Solo found himself dumped on Mimban as a mudtrooper.  While there, Han met an Imperial prisoner named Chewbacca in an encounter that would change his life. (Taken from the figure's packaging.) 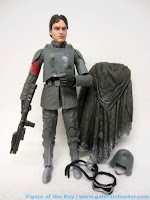 Commentary:  I am kind of amazed by how good the Solo: A Star Wars story figures mostly were.   None of them (save of the 3 3/4-inch Han heads) seemed particularly off, and this particular Han Solo - most likely just my sample - has a bum elbow.  I can't get the right elbow to bend.  I'm not crazy about that, but assuming it's just mine?  This is a very nice figure. I'm kind of amazed we got this figure given how most movies are ignored a year after their theatrical release, and I'm probably going to try to do some surgery on that elbow to see if it helps.  Hasbro did a great job with this one, and so far it seems to be one of their better overall figures from the new movies.  You get great paint, an awesome costume, a wonderful and almost eerie likeness, plus tons of removable costume elements.  Short of two bending elbows, what else could you ask for? 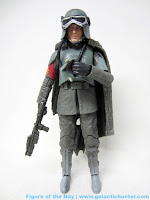 I like how Hasbro made it so it can do double duty as Han or a generic trooper.  The head looks a lot more like Alden Ehrenreich thanks to the face paint,  which looks darker but not dirtier.   The armor is covered in grime, with painted gloves and beat-up armor.  Articulation is more or less par for the course, and you can even have him pulling down his removable mask.

As accessories go, this one is bonkers.  The figure's armor has hose hook-ups for the face mask. You can put his helmet on, and the goggles can be on the helmet or over the eyes.  The blaster looks great too, but there's no holster or anything special for it.  On top of all of that, the cape can drape over buckles on the shoulders.

Obviously, get one or two if you have the chance.  It's a nice trooper figure and I don't know if Hasbro will crank out repaints or not.  I hope they give it some thought.