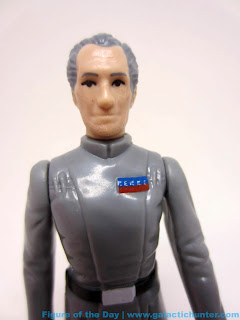 Bio: After Supreme Chancellor Palpatine transformed the Republic into the Galactic Empire and proclaimed the Jedi as fugitives, Tarkin became the Empire's first Grand Moff, and regional Governor of the Outer Rim. With this responsibility, he was also given oversight of the Death Star which he took command over after removing Orson Krennic from the position once it was operational. (Stolen from Wookieepedia.  Packaging has no bio.) 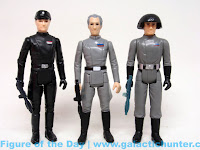 Commentary: This is kind of a big deal.  To date, Hasbro (and Kenner) have largely ignored vintage-style figures save for a rocket-firing Boba Fett (a big deal) and a handful of remakes from the 1978 debut series.   Boba Fett is arguably a new entry to the line, but everything else is just a rerun - seeing Grand Moff Tarkin in plastic decades after his proposed inclusion around 1986 is something if a bizarre miracle. 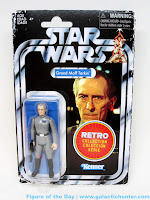 At Toy Fair 2019, Hasbro said that this was one of the most difficult sculpts they've ever had to do, as it is a real challenge to capture the flavor of a figure from 40 years ago.  While that statement of the challenge is true, Hasbro left out that much of Tarkin was "borrowed" from the 1980 Imperial Commander action figure.  The torso and arms are brought over to Tarkin with minor changes, you can see a couple of added folds, a smoothed-out belt buckle, an updated rank badge, and added code cylinders - but the hands are very, very close to the Commander's right down to the glove wrinkles on the back of the hands.  Similarly, the legs are different but there are enough similarities in the wrinkles and general look that I assume Hasbro got their mitts on Gentle Giant's jumbo figure scans and modified them to make Tarkin.  Kenner very rarely cannibalized old sculpts to make new figures in the Star Wars line save for a couple of droids, so this is kind of a cheat.  It's totally a cheat, really.  I don't think most fans are going to make a fuss over it but it's hard to ignore the similarities. 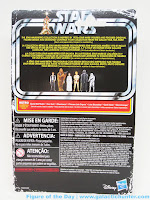 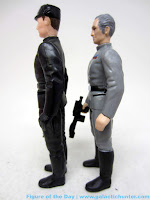 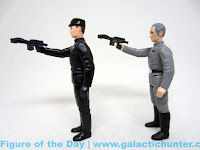 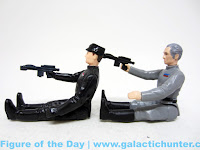 The figure also improves on his ancestors.  Tarkin's legs can swing forward better than the Commander, allowing him to fit in vehicles and sit very nicely.  The blaster, at first glance, isn't different at all - the same patterns and landmarks can be found here as you can find on original blaster pistols.   He has no problems standing, The shoulders seem to be seated oddly on the torso, but presumably that's due to the digital development of this one.  Sometimes it doesn't sit quite perfectly.

With the relative decline of newness in the 3 3/4-inch line, this is certainly a welcome injection of something new, fresh, and interesting.  I fear it may be a little late as the target market for this figure is probably in his late 40s or even early 50s, but I see this and I also now see no reason for Hasbro not to slide Vlix, Gargan, and other sculpted-but-never-released real-deal Kenner action figures from 1983-1986 in the marketplace.