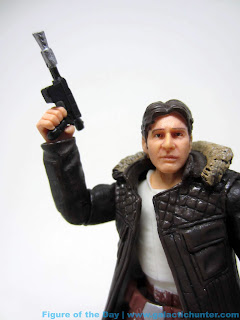 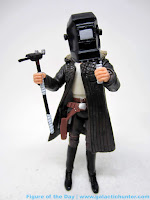 Commentary: The last time we saw this figure was in 2010.  Han Solo (Echo Base) looks quite similar for the 2019 refresh, and it's repeatedly amazing to me that we got this one nine years ago.  To put that in perspective, that's like if the 1978 Han Solo figure showed up again in 1987 - when Star Wars as dead as Avatar is right now.   The main, big difference is the figure's head.  Harrison Ford's head has always been tough to get right, and they softened his features here with a high-resolution portrait printed on the exact same head sculpt we got before.  As I've been fond of saying, deco matters - the best sculpt in the world lives or dies by the paint masks.  Hasbro nailed it here, giving one of its better Han heads to one of its least essential outifts.  If there's only one Han Solo figure from the original movies to skip, I'd say it was this one - not because it's bad, but because it doesn't have a lot of places to go in your displays or dioramas.

The figure ticks most of the boxes, with a working holster and cool accessories.  The holster is a separate piece, but it's a little big and loose over his waist and leg.   Just sculpting it right to the body generally gives better results, but at least you've going swivel wrists and ball ankles and a bunch of other joints you will most likely never ever use for this figure in this costume.  It's nice to have the options, though.  Han's Hoth jacket is wide open, once again showing a white lining behind the figure.

For variation hunters and those seeking the very best of every possible release, this is a figure you should have already purchased.  If you missed him the first time, you simply must get this better version.   If you're happy with your 2010 Echo Base Han just keep scrolling - you're basically shelling out a 50% premium for an admittedly very good head upgrade.