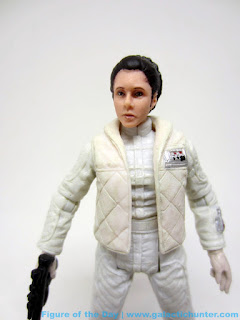 Bio: Leia Organa, a Force-sensitive human female, was a princess of Alderaan, a member of the Imperial Senate, a leader of the Alliance to Restore the Republic, a member of the Galactic Senate, and general of the Resistance. (Stolen from Wookieepedia.  Packaging has no bio.) 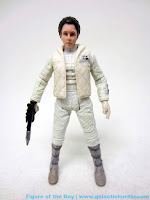 Commentary: Previously released as "Leia (Hoth Outfit)" in 2010, this figure is now Princess Leia Organa (Hoth) in 2019.   And she was really good in 2010 - I wrote: "There isn't much else you can do with her that would be reasonable at this stage, so hey Hasbro-- good work! Who's next?"    Hasbro used some off-white weathering back then, and a lot more make-up than we usually got.  By dialing back both, they improved the figure dramatically.  The costume now more closely matches the image on the cardback in almost every way, with the only place I could see room for experimentation is more deco on the face.  I think the figure looks fine, but Carrie Fisher had a bit more going on around her eyes - I'd be curious to see if Hasbro could do something with that at 3 3/4-inch scale without looking like Alice Cooper.

It's a big improvement - I didn't even realize how much of an improvement it was until I started on this review.   Obviously if you're happy with what you have, you don't need to upgrade.  If you want the very best, the 2019 Hoth Leia is it until Hasbro decides to pay to tool a new one, or another competitor if Hasbro some day decides they no longer need the 3 3/4-inch slice of the license.

Just don't forget, the core of this release is a figure from 2010 - right before Hasbro started to add in rocker ankles, bend-and-swivel wrists, and lateral hip movement on some of its figures.   More closely matching the 2018 Solo Force Link 2.0 Hoth Leia, her head now has lighter lips, a more complete but thinner line around the eye, improved eyebrows, and a better overall skin tone.   This 2019 figure is a pretty good combination of the best of the 2010 and 2018 figures, with the best of articulation and deco worlds and a face seemingly painted on much straighter.  She can stand, sit, hold her blaster, and be posed very nicely. 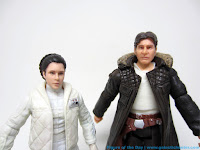 Hasbro's deco has upgraded considerably, no doubt thanks to refinements in manufacturing technology and also having a little more budget.  A reused mold means big savings, and even with inflation that leaves a few extra cents for better paint.  Over the years we've seen dramatic improvement in sculpting, but if deco is just a tiny bit off it ruins the figure.  With improvements this big on an old figure, Hasbro could probably do a few victory laps with its existing molds and get us all to bite a few more times.  Nicely done.