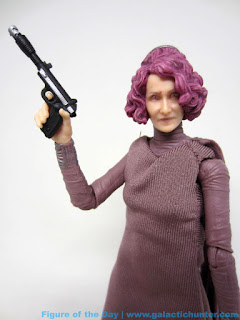 Bio: Commanding officer of the Resistance cruiser Ninka, Vice Admiral Holdo has been a trusted ally of General Leia Organa for years.  Holo radiates a quiet confidence with her measured words, but will it be enough to light the encroaching darkness? (Taken from the figure's packaging.) 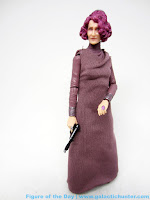 Commentary:  I wonder if we got this character because Winter would require royalties to Zahn?  Well, Vice Admiral Holdo held the screen nicely without us getting a lot of time with her.  Played by the fantastic Laura Dern, she of Diane, Ellie Sattler, Ruth Stoops, Susan, and countless other role fame, it was awesome to see Hasbro give us a high-ranking dead character so soon.  It took us 20 years to get Grand Moff Tarkin, and thanks to Lucasfilm and Disney's tight-lipped-ness I assume Hasbro doesn't always know who they are working on are DOA.  Well, lucky for us.

I'm happy to see Hasbro do a Vice Admiral Holdo.  It's a B-.   There are design elements which are perfect, some that are very good attempts, and some that just kind of fall flat.

The bulk of the dress turned out well - the "dickie" is plastic, and has a lot of golds and bunches in it.  Is it weird?  Yes.  If you muck around with it, you can sort of bunch up the cloth parts of her outfit to look al ittle more like the movie. It's difficult to move the cloth to expose those bits of shoulder though, and since that's an important landmark it shows us yet another limitation of soft goods in toys.  The color is even throughout and they did a ncie job with the jewelry and hands.  She can hold her blaster just fine, and the hood on the back of the dress hangs nicely.  I find myself wishing the whole costume was plastic, just because it is such a mixed bag.  It's not awful - but for modern standards, anything less than perfect is usually rounded up to a disappointment because Hasbro will probably never, ever have a reason to revisit this character in this size and in this outfit.

This is a real pity, because of the head.  Hasbro's "Hyper Real" face printing has been largely good and constantly improving.  Captain Rex and D.J. kicked things off nicely, with fantastic versions of young and old Lando Calrissian and wonderful updates to other popular human heads over the last year.   Holdo is a step backward.  In the movie her eyes pop nicely.  They did a good job of making her look like Space Laura Dern, which is what you want.  The toy didn't quite get the dark parts of the eye make-up right, and the whites of the eyes aren't big or exaggerated enough - so the toy comes off as a little dead-eyed.  At least mine does, and so do the pictures I've looked at of the final product.  This is a place for customizers to do a better job, and if there's a running change I'd buy it.  It's a shame, because the sculptors did a nice job with the portrait and hair - but the eyes.  Oh, the eyes.  You deserve better Laura Dern, you really do.   At least the rings were painted amazingly well, which is a bit of a surprise.

I think the meme goes "thanks, I hate it."   It's almost perfect.  This is one of those figures that if you want, I'd have to say you're going to need to repaint her or take it and like it.   It might be the worst face print on the printed faces to date, and the dress comes off as a noble attempt but not quite right.  If Hasbro reissued her with some tweaks, I would be as happy as a large part of my readership would not be.  She's also without most of her friends - Leia's appearances from the movie haven't been made in this scale, nor have her aides.    Now where's my Twin Peaks Returns Diana figure?