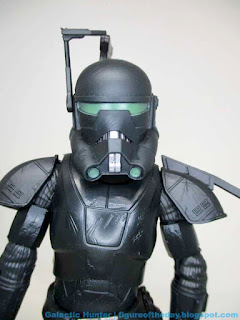 Bio: Formerly a member of the Bad Batch, Crosshair’s loyalties shift after his team defects from Imperial service. Committed to the Empire, Crosshair leads a new squad of enlisted recruits. (Taken from the packaging.) 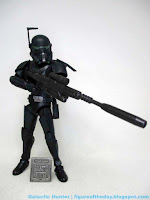 Commentary: When initially launched, I got a preorder in for Vice-Admiral Rampart but Crosshair (Imperial) sold out immediately. I was surprised to see him return, in stock, in December - so I went ahead and grabbed him with a Mando exclusive to qualify for free shipping at Walmart. The figure is the same tooling as the previous release, but with a $5 upcharge. Why? I assume a PopCopy employee has an answer. 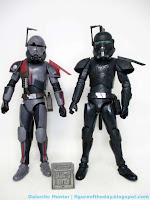 Despite the upcharge, there's not a lot new here other than deco and a helmet. back in the 2005-2008 period of the 3 3/4-inch line, we frequently got repaint waves - often developed very quickly - with no new tooling to get troopers out. At that scale and price ($5-$7) "close enough" was acceptable for all these clones and droids and troopers. The Black Series is supposed to be a premium collector format, so seeing the wrong pauldrons (there's no 99 on the show, nor is there a spike) and no battle-damage deco at all make me assume either Walmart jacked up the price because they know they can get it, or Hasbro increased the price because they know they can get it. A newly-tooled helmet isn't enough to warrant that kind of price increase, and exclusive prices at Walmart (and elsewhere, but especially Walmart) have been all over the map lately. 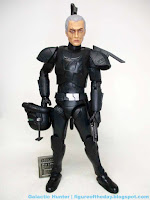 If it wasn't for the show accuracy, I would say this is a spectacularly cool figure. A version 2.0 seems possible, because Crosshair's unmasked head gets messed up as the season goes and they could justify an all-new figure later. (This is not without precedent.) He stands well, holds his weapons well. The holster works great. The backpack can stow the rifle. I love the new helmet with its green visor, revised face, and articulated rangefinder. This is an awesome action figure, no doubt - even without painted silver scuffing, the sculpted scratches and dents look pretty great. I doubt most fans who watched the show won't even realize it's not completely accurate, and I assume Lucasfilm and Hasbro know this too given the character was largely seen in dark places. It's cool. It looks neat. If you never saw the show you'll just love it to pieces.

The unmasked helmet has Crosshair's trademark crosshair over his eye, and the figure's mutations make him look less and less like the prime clone. I hate that I both love and dislike the figure. If this were from some video game I never played, I'd say "this is awesome! Go get it! Treat yourself!" without a thought about accuracy. As a major character from a TV show, it's disappointing - not bad, not awful, just not as good as it should be for a figure like this. And I bought it anyway, and I really like it. If a newer version comes out I'd say skip this one - heck, the previous one's paint was lacking, so hopefully some day we'll just see a very fancy, very premium Evolution of Crosshair 2-pack where they smooth out the rough parts of both releases and trick us into spending another $50-$60. Until then, at $25, I can't deny that this is one awesome looking chunk of plastic.