Star Wars Figure of the Day: Day 2,891: The Mythrol (The Vintage Collection) 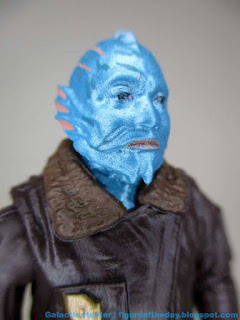 THE MYTHROL Toy Debut
The Vintage Collection 3 3/4-Inch Action Figure
Item No.: Asst. E7763 No. F4464
Manufacturer: Hasbro
Number: #225
Includes: Pistol, puck, binders, tool
Action Feature: n/
Retail: $13.99
Availability: December 2021
Appearances: The Mandalorian
Bio: Once the Mandalorian's bounty, the fledgling Mythrol is now trying to make a living in the office of the Magistrate of Nevarro. (Taken from marketing copy. There is no bio.) 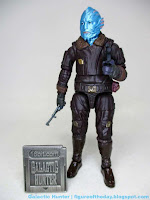 Commentary: The Vintage Collection has really turned itself around with its new releases - it seems every wave or two, a figure seems like the very best 3 3/4-inch action figure Hasbro ever gave us. The Mythrol is another one of those "best ever" candidates, thanks to a great sculpt, a surprising abundance of gear, superior articulation, and paint that goes above and beyond what we're trained to expect. It feels like Hasbro read a bunch of reviews and decided to make something amazing purely to spite critics to have nothing to say.

The blue, semi-anonymous alien was one of the first characters we met in The Mandalorian and was one of few sniveling cowards in a sea of sincerity. The heavily made-up Horatio Sanz had on a brown costume presumably meant to keep his character moist, and it was replicated here nicely looking something like a bomber jacket or old-fashioned pilot's suit. Uneven lapels struck me as a surprise, but it and every detail on the costume look great. The boots are a different brown, as is the pouch on his belt. He has special embellishments on his shoulders, and they're painted - as are other silver and gold accents. The wrinkles all look good, the pleats and creases all align nicely. Be it Disney's asset team or Hasbro's sculpting department, just the outfit is pretty amazing - and then they do a bang-up job replicating the alien head and gloved hands, too. With little to no articulation, it would be one of Hasbro's best sculpts in recent memory. 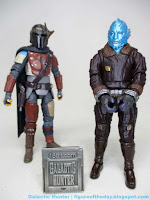 Deco makes up for some lackluster figures lately. With the recent The Emperor having very little neat to show for it, the Mythrol has so many decorated accents and trims to his outfit, you may almost miss just how insanely ornate the head is. A shiny blue skin has additional pink and blue accents! The eyes really pop, and after being used to most alien heads being molded in color, this is a really excellent figure. With reissues of other figures at $14 it's easy to complain what we're getting just isn't that great, but The Mythrol is a figure you look at and can see where the money went. It's better than a typical figure - and it has great articulation, too.

Whoever engineered this one deserves a medal. He can use all of his accessories - binders rarely fit well, but here? They fit. The blaster fits in his left hand, the pick and the torch fit nicely in the right. His arms swivel and bend so he can look decent using all of his equipment, which can be tough when anything demands a weird hand shape or specific arm pose. What I really love, though, is the hip articulation - they designed this guy with sitting in mind. You'll have no problems getting him to sit in a chair, and I assume once my Razor Crest shows up he can plop in the seat right behind Mando without any problems at all. Future figures may be measured against this one, as his wrists and elbows even have a little more give in them than usual. 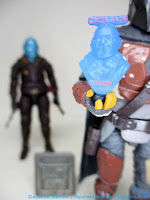 If that weren't enough, you get a tiny little holographic bust in the form of his "wanted" puck. Hasbro painted it with red letters, which was pretty spectacular, but also ensured the image went from blue at the top to colorless near the base - just like on the show. His other gear is molded in color and is generally great, but I don't have any specific praise other than "it's good, it's really good." The puck itself was a surprise winner, mostly because it's the kind of thing you would expect to be held back for a convention exclusive. But no, it's here, for $14.

Hasbro hasn't made all that many figures for The Mandalorian (not counting metallic repaints) at this size. I believe this is #13 since the show's 2019 debut, which is kind of astonishingly slow - but it's good. It wouldn't have been this perfect had it came out in December of 2019 when the character first appeared, so I'm glad we're seeing better figures as lead times (and prices) go up. You can go ahead and buy this one and you'll be glad that you did.