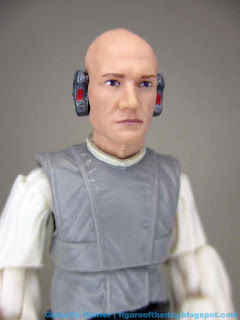 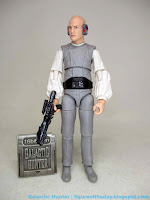 Commentary: When it comes to the older characters, it's hard to know why Hasbro makes some figures. Over the last few years we've found out that some classic faces are hints - we got a new Emperor pre-order before his appearance in The Rise of Skywalker, and we got new Lando Skiff around the same time the outfit showed up in Solo: A Star Wars Story. Retro faces aren't always here to announce a returning favorite in a movie or streaming series, but it happens often enough that Lobot seems conspicuous. His last new figure was in 2004 and other than possibly showing up in the Lando series in a year or three, we don't know of any excuse for him to appear on anything any time soon.

While Bo-Katan Kryze has the best new articulation I've seen, and the Mythrol has some of the best 2016-2021 style articulation I've seen, Lobot is something in the middle. The hips are somewhere in between - the legs don't quite swing forward without a fight, but look like an evolutionary step closer to what we got with Bo-Katan and Kuiil. It's a ball-and-socket joint, but you have to twist the thigh to get them to swing forward. Functionally, it's decent. It looks great. But the user experience is a bit more fidgety than I would like, making it a good-but-not-great one. (It's not like you're going to play with him much, anyway.) 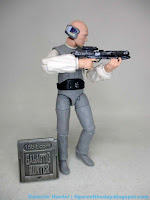 Arm articulation is good if a little stiff, making this a good example of a designer trying some new things to make a better figure. He can hold a blaster with two hands, pretty much every joint moves well - but the elbows are a little stiff. I really don't like the mid-torso joint (why not have it articulate at the belt so it isn't ugly?) but it does work just fine. I very much liked the fairly stiff 2004 Original Trilogy Collection Lobot, but this one looks more like the performer and is significantly more modern in appearance. The head sculpt is good and the printed face is excellent, with features seemingly slightly more defined than the fair eyebrows and pale lips seen in the movie. This isn't a complaint - when you're dealing with a head this small, things have to be exaggerated or you won't even see that they're there.

So you've got a good figure, with a confusing accessory - Hasbro opted to do the Disney-era Stormtrooper blaster rather than the Original Trilogy version. There are some minor changes, like the extra bit hanging off the side, that lets you know this isn't the correct one from the movie. For all I know it has to do with legal reasons, but given how many incorrect lightsaber hilts we've seen over the years it's probably just an oversight in production. It's also better than no accessory.

Seemingly not essential if you've got a Lobot, this is a really good update of a character that hasn't got a lot of attention over the years. It's his fourth 3 3/4-inch figure, and it's the best - if you feel like getting one, you should. He sits, he stands, he looks good - there's not much more you can ask for here. Maybe in 15-20 years we'll see Hasbro innovate more and come up with another version, but I assume this is going to be the last Lobot most fans will ever need. (Unless he shows up in a new costume, played by a new actor.)