BO-KATAN KRYZE One of the Best
The Vintage Collection 3 3/4-Inch Action Figure
Item No.: Asst. E7763 No. F4465
Manufacturer: Hasbro
Number: #226
Includes: 2 blasters, helmet
Action Feature: Removbale helmet, blasters fit in holsters
Retail: $13.99
Availability: December 2021
Appearances: The Mandalorian
Bio: A gifted warrior and legendary Mandalorian, Bo-Katan Kryze is the last of her line. She leads a team of Clan Kryze Mandalorians striking back at the Imperial remnant. (Taken from marketing copy. There is no bio.) 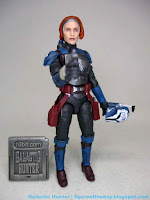 Commentary: Impressive - but not without faults! When opening Bo-Katan Kryze one of the first things I noticed was the new construction of her legs - the hips look a lot more like classic 1980s o-ring G.I. Joe figures, and those had a spectacular range of movement. (But, of course, crumbled once the rubber band needed replacing.) This one does something a bit better with a ball-and-socket joint allowing for a full range of movement, with added bend-and-swivel knees, swivel thighs, and other joints ensuring she has a spectacular range of movement. Her holsters aren't glued to her thighs either, so she can go in a ship and sit down if she likes. It's not merely a good figure for collectors, it's a pretty good toy too - and balancing that has been difficult in recent years. 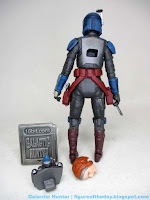 My praise of this figure is mostly glowing, with a couple of minor quibbles. Deco is excellent. The sculpt is excellent. Articulation is excellent. There are two nitpicks I'm going to dump on before we get on to more praise - one, the "owl" shoulder tampos are sloppy and off-model. You probably won't notice them much, but they're just bad, and Hasbro can and has done better at this size - the 1995 Kenner Boba Fett was sharper than this. Two, the holsters are a little too tight for the blasters. You can get them in there but it's really really really tight and may lead to paint scrape over time. Other than that, you've got a figure that shows just how good Hasbro has gotten at making human figures at this scale, which is kind of infuriating given that the line is still largely reissues and repaints much of the time. 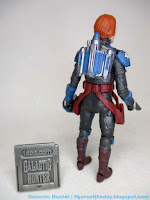 Bo-Katan's head looks just like Katee Sackhoff on the show, complete with headband and wig. The face paint is really good, with teeny tiny eyes, painted lips, and spot-on eyebrows. I'm kind of amazed that we haven't been hearing universal praise in the fan community for getting a popular Mandalorian - one who has been in at least three TV series - for basically being perfect. Look at any Rey or Leia from a few years ago, and it's amazing how Hasbro has seemingly slapped a real photo of a real person on a 3-D plastic head the size of an M&M. While the figure has a helmet, it's not a traditional helmet - the complete head must be removed, and replaced with the helmet head. One advantage this has is that the figure's hands can hold the neck peg like a handle, so she can carry around her helmet. The detail on the helmet head is also excellent, but my sample's rangefinder doesn't move - and I'm not sure if it's supposed to move, either. The deco is superb, with gritty black paint visible on the back, some silver scraping, and other scuffs on the front. I'm sure there are improvements for a future release, but this is way better than anything we ever get at this size. She's probably a little better than the 6-inch figure. 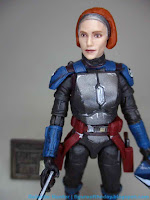 I've had this figure standing up on my desk, without stand or other assistance, for several days. Even with the smaller feet, Hasbro designed her with a good center of gravity - perhaps aided by the non-removable backpack and decent ankle joints - ensuring that she won't flop over before the play battles start. The silver painted armor looks great, with brighter silver scuffs and lots of sculpted detail like her wrist rockets, pockets, and some seams on her clothes. Considering what we grew up with in the 1970s and 1980s, it's a remarkable improvement that's mind-blowing over what we were getting just 5 or 10 years ago, and a figure that certainly makes a compelling argument of why this figure should cost $14. (But not the reissues. They still really don't seem to have "it.") I love the colors and while I would love some more paint on this figure's boots and better shoulder tampos, it's still a mass-produced 3 3/4-inch figure. This might be one of the very best we'll see in this line, but I hope not - there are plenty of characters to do, redo, or just plain upgrade now that we see what Hasbro can deliver when allowed to make a 100% new figure. (And while we wait, I'd also like a Koska Reeves, please and thank you.) Unless you have it out against the series, definitely make sure you pick up all these 3 3/4-inch The Mandalorian figures. I've not been disappointed.