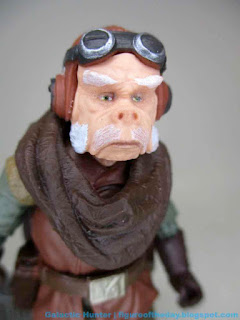 Bio: A vapor farmer on Arvala-7, Kuiil came to seek peace in an out of the way world, which is now being trespassed upon by criminals and mercenaries. (Taken from marketing copy. There is no bio.) 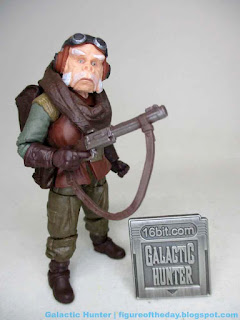 Commentary: When you get a figure this good, it reminds you why you collect The Vintage Collection in the first place. The Mythrol used good versions of the old, weird bend-and-swivel hip joints so he could sit well and look awesome at the same time. But Kuiil uses a ball-and-socket joint, much like you saw with Stikfas, Xevoz, and even classic Beast Wars toys. You get a lot of range of motion with fewer parts and less manual labor for assembly. If done right, everybody wins! Other than a lack of accessories, everybody wins with the Ugnaught. I have spoken.

Hasbro has, to put it simply, struggled to get the colors right on Kuiil - this one is correct. The 6-inch The Black Series figure is too bright, so it needs a repaint - and the 6-inch Credit Collection figure isn't exactly better. The Kenner-style The Retro Collection figure is both the wrong size and the wrong color, but that's OK. Is this hypocrisy? No, because Kenner got aliens so off-model in 1979 that we're very approving of such choices in that style. (Confidential to Disney/Lucasfilm: please make all pre-release design characters in Kenner style first, that way I will not complain if they're off-model. Thank you.) This guy has his scarf, a removable backpack, and a blaster. Heck, he's even got a separately molded (but non-removable) helmet that really adds to the look of the figure i a way paint can never replicate. You're paying $14 for one figure... but it's a very good figure, with excellent sculpted texture, wonderfully painted eyes and facial hair, and a surprisingly ornate paint job on his hat. Because it's an Ugnaught it may be destined to pegwarm, but I recommend you just buy it. It's good. You'll pick it up and futz with it and go "oh, they did a good job with this one."

The sculpt of the figure perfectly captures the animatronic mask and outfit, so there's no reason to dwell on it. I can't imagine they'll do better in my lifetime. Articulation is also good, with a head turning over the scarf, elbows that can bend a little more than 90 degrees, and those marvelous hip joints seemingly designed to sit on a Blurrg should Hasbro ever make one for this scale. (He sort of fits on the Mission Fleet one, which is too small.) The skirt part of his vest was designed with enough clearance so the new hip joints can swing forward without a fight, and the knees have a good range of motion too. I'm counting about 26 meaningful points of articulation here, thanks to surprise joints like a knee that both bends and swivels below the knee. This is a figure that seems like it was engineered by someone who played with recent releases and said "These are good but I can do better." And to you, sir and/or ma'am, you were correct. This is great.

Kuiil can stand, hold his blaster, and look amazing doing it. He's so good that I would probably stop collecting The Black Series if Hasbro would give us some kind of promise to do those characters in the 3 3/4-inch format. (It's a pretty short list of absent faces at this point.) It just goes to show Hasbro is still capable of greatness at this scale, and I sincerely hope everyone reads this sees how good this figure is, and buys it, to show Hasbro that there is still money in this format rather than ceding it to the 6-inch line. Not that the 6-inch line doesn't have a few rockstars, but I really like this one a lot more.

Knockout wave! Yes to Aliens! I have spoken!