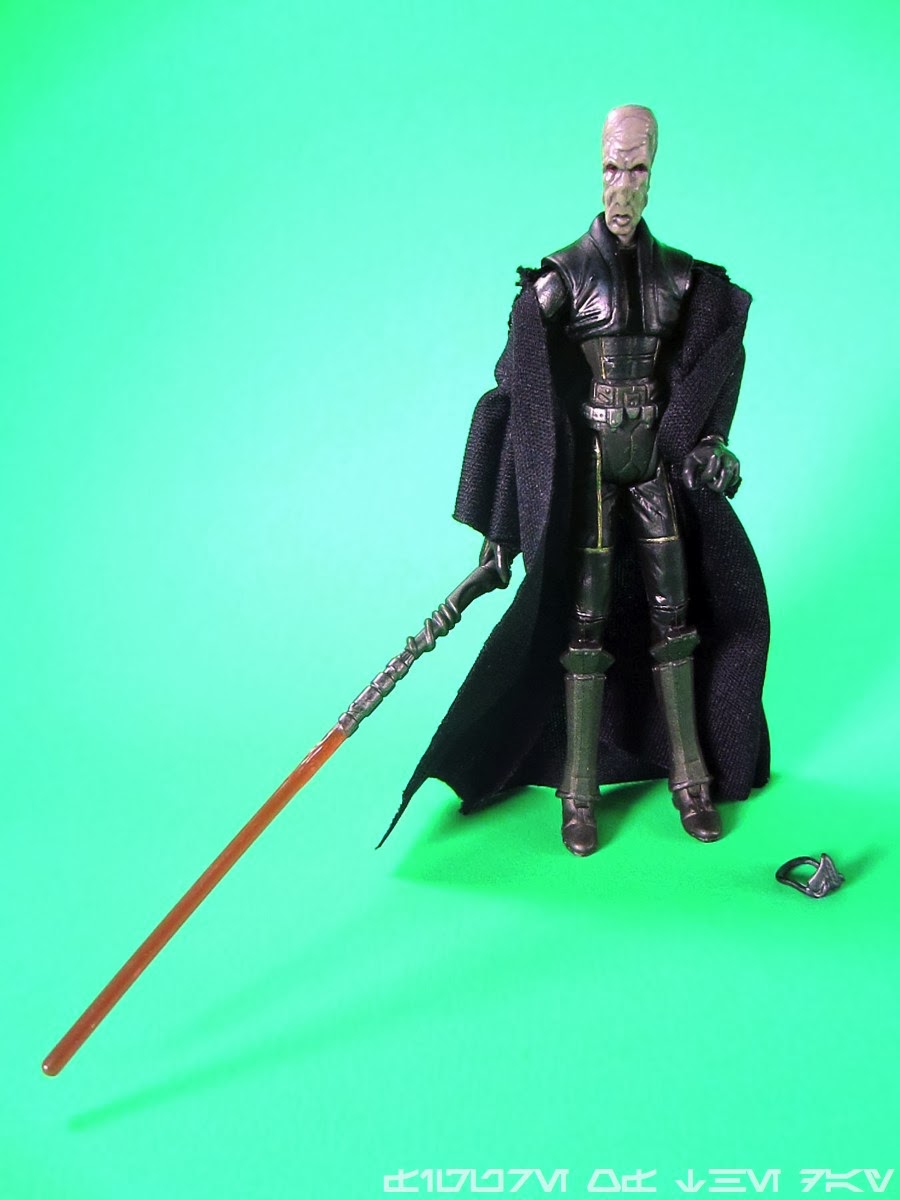 Bio: Known as Darth Plagueis the Wise, this Sith Lord experiments with ways to cheat death, using midi-chlorians, until he is killed by his own apprentice - Darth Sidious.  (Taken from the figure's cardback.)

Commentary: If you're a younger fan - as in, under 20ish - you probably have a soft spot in your heart for Darth Plagueis and maybe view him as an important character.  If you're an older fan, he's probably of no consequence - if this divide sounds ridiculous, I remember hearing from numerous fans back in the late 1990s and early 2000s that Mon Mothma was one of the most important characters in the original trilogy due to perceived events and her rank in the Rebellion - but anyone who saw the movie who wasn't preposterously invested in aspects of the lore would see this as ridiculous.  I see the fact that Darth Plagueis made the main line as nothing short of a miracle - Hasbro has historically had little problem selling any Sith figure save for Palpatine and a couple of Mauls, and maybe the odd Vader.  As categories of characters go you could just sit around and make up new Sith Lords all day long and fans would buy them, and for that reason (combined with the consistently poor distribution and what may be lower runs) there's little to no risk of making a character that fans demanded a toy for before anybody knew what his species was.  Completely new characters-as-toys are rare in the hobby these days, and my assumption is that this figure will stay scarce and therefore in demand from the Sith faithful while a lot of the old-school fans may shrug a bit.  I'm in the middle, personally - as a fan of obscure nonsense, I like him much as I would have appreciated Jaxxon or Sedriss.   It's not unusual for the licensing juggernaut to expand on a throwaway line from one of the movies and make it into something bigger, and the Muun Sith got a novel (after several years of delay), a miniature figure, and this action figure.  That's pretty good for a throwaway line in the final Prequel!

The figure itself has a design that seems more consistent with the days of the Empire than the robed Sith.  There's a removable cropped vest that's not unlike the costume of Starkiller, plus ripped abs on his torso that come off as kind of silly for such a thin character.  Hasbro's take on the figure seems designed to please a certain kind of fan, with generous articulation and more black than a Spinal Tap album cover.  It's almost silly how dark this figure is, but the articulation is almost exactly what fans would want.  There's no waist joint, but with swivel wrists and a grand total of 13 joints it's pretty good.  He has no problems sitting and all joints work pretty much perfectly - if you want him to have perfectly bent knees, you may do so.  He stands well, particularly for such a skinny figure - this is an area Hasbro has struggled with and as I have not had him long, I don't know what gravity will do to him on a shelf over time.  (Nosedive?)   Because Hasbro gave him an excellent range of movement, he has no real problems holding his accessories either.  Getting his mask on can be tricky, as it involves decapitation and the plastic of both the mask and the neck are very thin - I expect snapping parts in the future.  It feels more fragile than other figures, which is one of the reasons I've been a big fan of the Saga Legends/Mission Series style.   Longevity trumps articulation every time.

Because it's a new sculpt of a new character and occupies a strange place of having limited presence at the time of his ascent to cult status, for all intents and purposes this is the next prequel-era Boba Fett.  I don't know of anyone else getting so much adoration with so little backstory (which, of course, came later.) (Well, I guess Aurra Sing did as well.)  If you're already a fan, you bought this figure and have been grinding your teeth as you read the last couple of paragraphs.  If you aren't a fan, it's still a nice figure and I would suggest picking it up to add to the ongoing plastic glut that will some day bury you in your office while you wait days if not weeks for someone to find your barely-alive body.   Also, it's a lot of fun!

Collector's Notes: I am hearing this figure is hitting Walmart stores.  I got mine at Entertainment Earth in a wave 3 case.   Much like Darth Revan and Darth Malak in 2007, this figure's built-in audience will probably do a good job of preventing you from ever seeing one in a store.   I would not anticipate this being an easy figure to find based on how Hasbro has shipped its collector-oriented figures since 2011, barring a mass dumping at Five Below or TJ Maxx in the coming year.  Were this figure shipped in good numbers, odds are it wouldn't sell.  Because it's scarce, it's a legend.  There's really no best case scenario on a character like this one when it comes to making a casepack.

Email ThisBlogThis!Share to TwitterShare to FacebookShare to Pinterest
Labels: Expanded Universe, Revenge of the Sith, Sith Lords, The Black Series

Be careful wit hthe throwaway lines..
once Alec Guiness said something about 'Clone wars' when he got Mark Hamill over with some Droids... we all know what that spawned.

Another thing:
I don't want to be guided to some sort of hated competitor, but is there a blog with such awsome detailed descriptions, concerning SW Vehicles/playsets/Creatures, too?

Nope. I get asked to do vehicles/playsets/etc. all the time but (I'll be honest) I don't want to do it unless some sort of freelance check comes with it. I've written thousands of FOTDs and have made tens of dollars from it.

That is a depressing lack of dollars.

It's lines like this that have kept me coming back throughout three different decades.