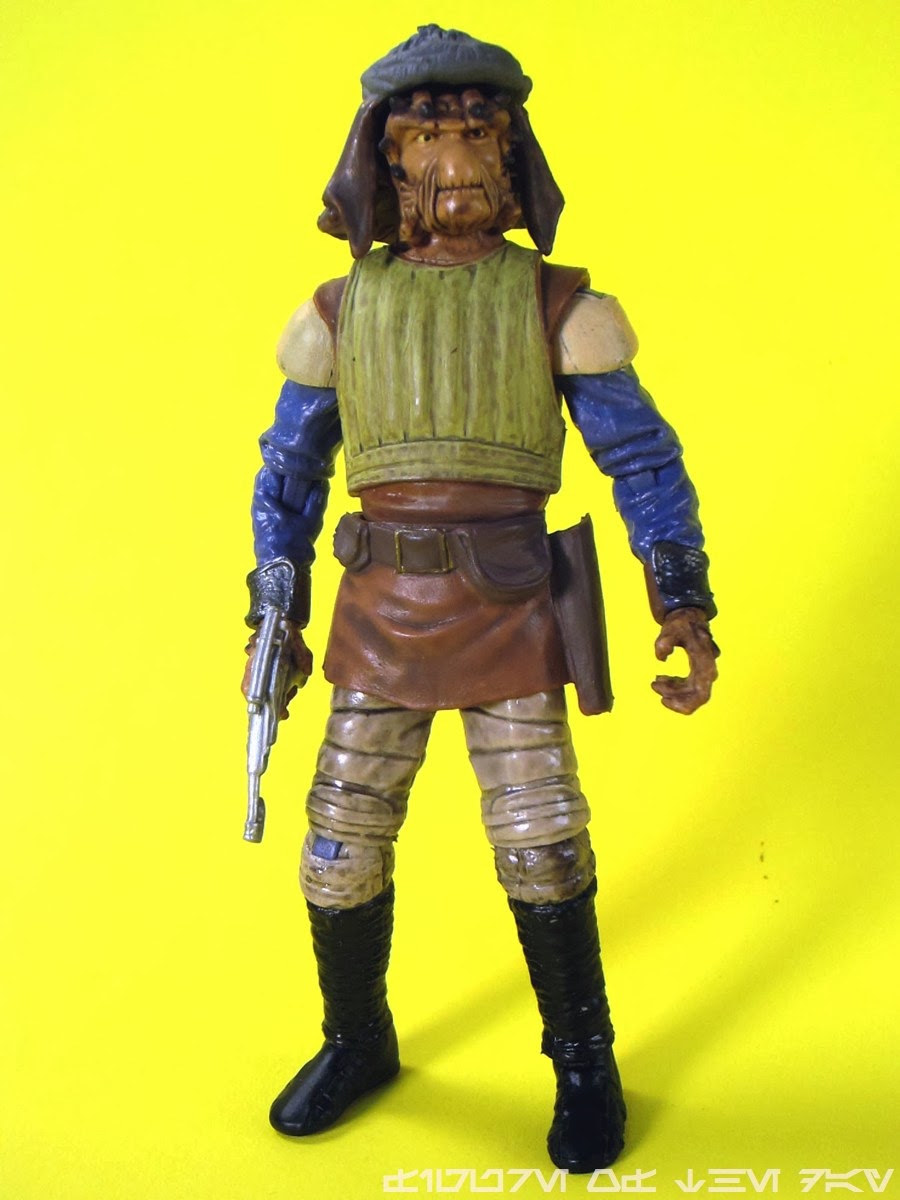 Bio: Vizam works as Jabba the Hutt's weapons master and is on the sail barge during the battle at the Pit of Carkoon.  (Taken from the figure's cardback.)

Commentary: While we still don't have remakes of all of the 1970s and 1980s figures yet, Hasbro is going back to update new figures from the 1990s.  Vizam was previously made in 1999 as part of Jabba's Skiff Guards, a 3-pack which included Klaatu, Nikto, and Barada so everyone can laugh at what they think is a reference to something other than The Day The Earth Stood Still.   The original figure had 6 joints, this one has 14.  The original figure had one accessory, this one has 3.   By numbers alone, this is the pure winner.

While I will grouse slightly just to say I never felt I needed an update of this figure, it's a good figure.  The dirt is spread a little more this time around, and the sculpting is a complete improvement.  The joints are nice and tight, plus the figure can be easily posed holding the large cannon with no problems staying upright - so far, anyway.  That's impressive.  He has a holster for his smaller gun, and the big gun clamps on to the rail of your Desert Skiffs from 1999 and/or 2008.   For those of you thinking that Hasbro made this as a teaser for an upcoming sail barge, uh, no.   A very similar cannon was sold with Nikto Gunner Nysad in 2009, too.  I give Hasbro points for synergy and rewarding long-time collectors, but it's always strange to see an accessory released for a toy that hasn't been out for five years... which was itself based on a toy that was first available 21 years before that. 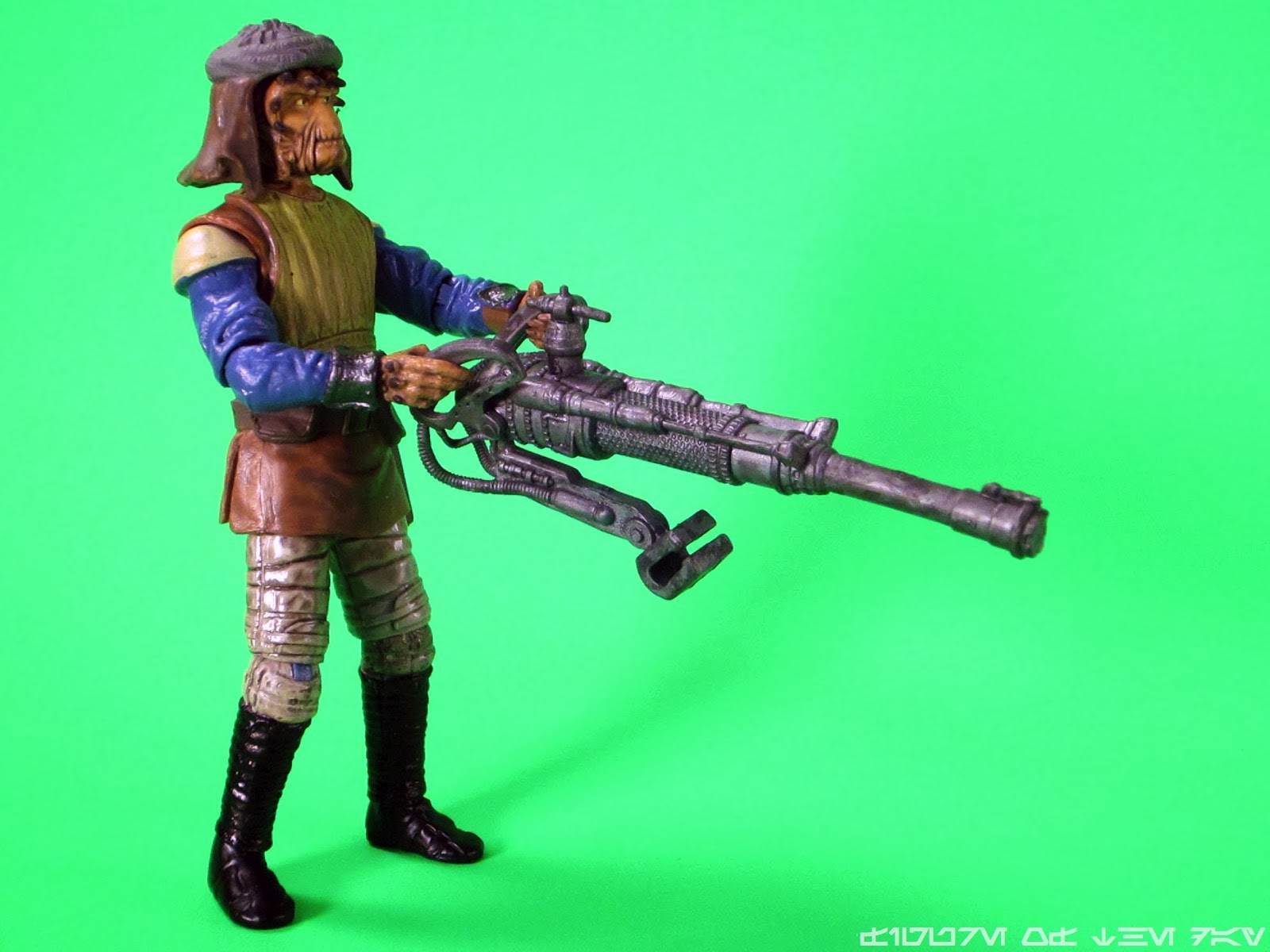 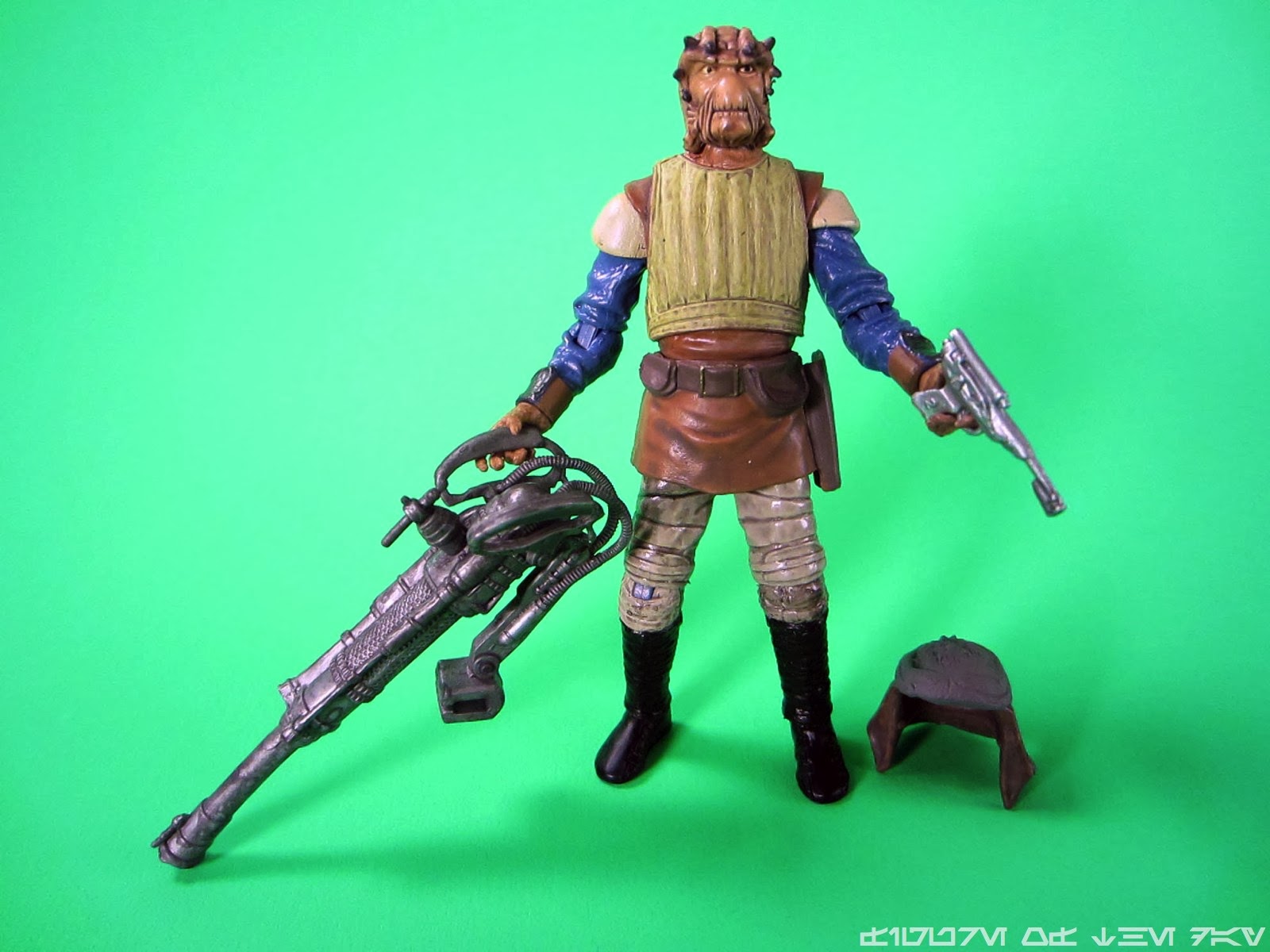 The pistol is nice, and fits in the holster well.  The hat requires a little futzing to look right, but fits on the head quite well.  The one thing about this figure that I don't like is that Hasbro really lightened up the areas round his eyes to the point where it's a little distracting.  The figure looks like a human head with latex appliances rather than a cheap rubber mask, and well, I'm partial to cheap rubber masks.  Also, you'll notice the plastic rings used in the knees and shoulders are blue - so they don't match the surrounding plastic of the shirt or pants, much like some of recent clone troopers in the Geonosis exclusive sets.

This is the only new Trilogy-era figure of the wave, so it's nice that Hasbro made it a good one.  I could stand for a few more Jabba's aliens, preferably all new ones, but Hasbro did a nice job here all the same.  Since we had a remake of Barada/Kithaba, I assume that we're going to see a new Klaatu Skiff Guard sooner or later.  For long time collectors or newbies, this is a nice addition.   As a progressively agitated old man, though, I'd really rather have had a remake of a lesser figure or an entirely new character... but hey, it's better than another Sith or Jedi from the novels.

Collector's Notes: I am hearing this figure is hitting Walmart stores.  I got mine at Entertainment Earth in a wave 3 case.   Given that many collectors are narrowing their focus a bit, and he's the only character from the original trilogy, well, I wouldn't get your hopes up.  Good hunting.