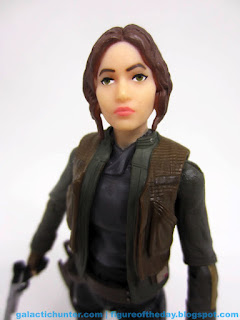 Bio: A highly skilled soldier in the Rebel Alliance, sergeant Jyn Erso is an impetuous, defiant, warrior eager to bring the battle to the Empire.  Jyn has little patience for debate within Alliance High Command, enough so that she takes matters into her own hands.   (Taken from the figure's packaging.) 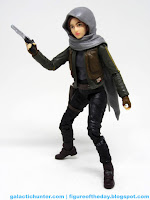 Commentary: Hasbro seems to have found a good groove on its The Black Series exclusives for "sneak preview" figures.   Last year we got a Stormtrooper with an art book, this year we get Jyn Erso with 4 oversized art cards.  If you want the figure early?  Here she is!  If you want every package variant?  Here ya go.  If you just want the figure, wait a few weeks, and you'll be covered.   Having seen precious little from the movie - seriously, not much at all - I can pretty much only talk about this figure in the context of the trailer and other figures.  Which, well, let's do that.   Taking design cues from recent big movies and the fashions of the late 1970s and today, Lucasfilm engineered a look that should resonate while we all wait to see how people like the character.  The trailer gives us a character who seems to borrow a grey shirt of the title character in 1977's Annie Hall, an overall fashion sense comparable to Katniss Everdeen with her fingerless gloves and military surplus-adjacent coloring (I was just at an exhibition for the Hunger Games movie last week), plus the scarf.  I'm guessing the design is all intentional and the disparate elements were indeed done to invoke a number of heroes and recent icons in popular culture, because it's not like Star Wars has a lot of women to draw upon.   Just a couple.  And I doubt Kea Moll hair and outfits would mean anything to the young audience they're trying to woo nowadays, so her look makes sense given the stuff I'm assuming they're trying to evoke.   Or it's just in my imagination. 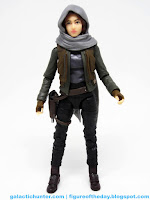 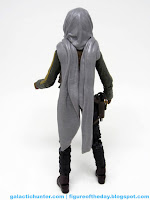 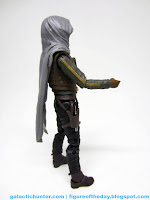 The scarf, OK, I find this strange because I don't understand fashion - but a few years ago scarves suddenly seemed to flare up all over the place.  Sonic had one.  Link had one.  Why?  WHY?   I don't know why she has one either, unless it's chilly, and I don't know the climate on the planet(s) on which she will wear this costume just yet.   As an accessory I quite like it, because it's also a hood and that mixes up how the figure actually looks, rather than seeming to be a garment that exists just to demonstrate whatever new physics a game developer came up with.  It's here, it's grey, it's unpainted, it's OK.  I'm just seeing a lot of scarves in franchises that never had scarves before.  I don't understand it, and it scares me. 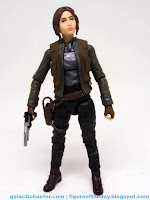 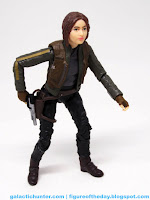 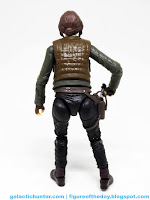 Her blaster pistol is small, black, and silver.  It fits in her hands flawlessly, and you can slide it right in her holster which has a tab to "lock" the gun in place.  A+, would approve of again. 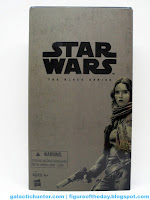 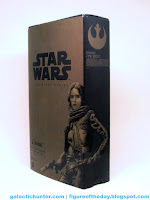 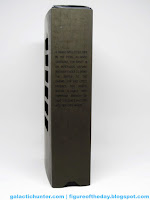 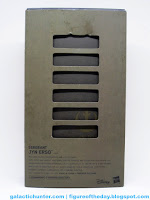 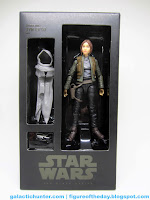 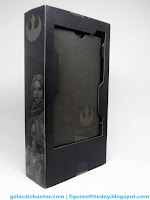 I'm mostly impressed by the figure itself, what with boot cuts and bend-and-swivel wrists.   I'm counting 29 points of articulation, granting me a figure that's mostly on par with last year's 6-inch offerings for the last new movie.  The various textures look great, and I am largely pleased with the coloring.  We don't have painted soles on her boots or anything too fancy, but the blue pants don't run in to the brown boots.  The zipper is painted, there's a little badge on her brown and green sculpted vest, and all of the pieces fit together visually and functionally.   Coming up with new 1977-era Star Wars isn't easy and were it not for the scarf, I'd say this is believably something that might be worn on Yavin IV, somewhere out of the range of the camera.

I am not overly familiar with the works of one Felicity Jones, so I'm working off press images and trailers - and I'd say it's OK.  Hasbro clearly got their sculptors doing a good job here, but the hair color, facial expression, and paint remind me a smidgen of The Hunger Games once more - the hair is, clearly, different.  This is clearly not Jennifer Lawrence.  But I'd be willing to bet if you took this figure up to someone who only vaguely knew the property and said "Here's your new Katniss" they'd say "Oh sure, looks good."   I'm not thrilled with the skin plastic, as it's a little too translucent and seems to be very soft on detail.  Compared to recent Marvel Legends or last year's Rey figures, Hasbro can do a bit more to make a face pop - this one seems to recede a bit.  The pink lips don't pop too much, the nose fads in, and the painted eyes and eyebrows look magnificent.  In many respects, it's doll-like - certain features are exaggerated while others aren't. 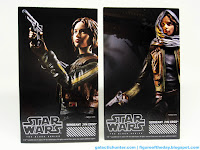 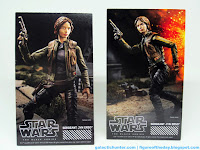 I like this figure - but I don't love it.   If Hasbro painted the skin on the face, rather than molded it, I bet it'd be fantastic - but as it is, it's just OK.  The outfit is translated nicely, the expression matches the trailers,  and while I could be completely full of nonsense this costume feels amazingly engineered to hit certain points in a pop culture junkie's brain - from numerous eras.      As an added bonus, four photo cards are included.  They're nice, but much like the booklet last year I would ask what purpose they serve.  They're neat, sure, but once you look at them they're too big to fit in trading card sheets and too small to frame.   You can look forward to losing them, or just move on and buy the regular retail release of Jyn Erso and forget they exist.  They're very nice photos, and would make an excellent ad or banner somewhere, but as a physical object don't do much for me.

Collector's Notes: I got this one at the show.  At press time she's quite expensive on eBay but I suspect prices will dip when the regular retail version hits stores in a few weeks.