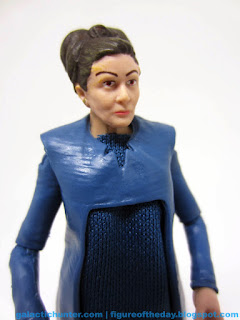 Bio: Despite all that she has endured and lost in a lifetime of war, Princess Leia Organa continues to shine as a beacon of hope for the loyal soldiers of the Resistance under her command. (Taken from the figure's packaging.) 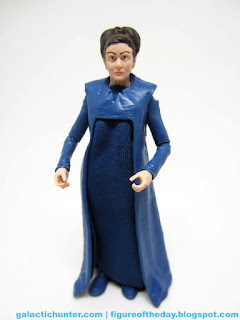 Commentary: While not the most memorable outfit she wore in The Force Awakens, this Princess Leia Organa figure retains her rank of royalty and is dressed accordingly.   Sadly, the figure was an exclusive and a late release in the line instead of something you could get at launch.  Seriously, Han, Luke, and Leia would probably have brought more people into the fold faster.   This movie-ending outfit wasn't where Leia did most of her memorable stuff, so I'm hoping we'll get the vested Leia later, but I am guessing it might be a little while.  I hope I'm wrong.

The figure isn't bad, but it's a strong argument for the figure appearing in the main line.  Why do her as a $13 exclusive when her legs and waist are almost completely restricted?  The long plastic gown looks nice, but isn't a great looking toy.  Why include cloth soft goods when their use is completely restricted?   The super-articulated knees and ankles serve no real purpose, nor do the swivel hip joints, nor does the ab joint.  The ball-jointed shoulders, elbows, and swivel wrists are nice - but there's no accessory, either.  Hasbro clearly put a lot of work into a figure that could have been made more cheaply and you wouldn't notice the difference.  Back in the 1990s, fans would refer to a design such as this as a "salt and pepper shaker" figure.

Thankfully, the sculpt is good - the head is nice, the hair is good, the dress is decent enough, but the eyebrow deco doesn't do her any favors and at this size, the face is a little lumpier than it should be.  She looks better on screen than the figure makes her out to be, but the figure does one thing well that most Leia toys can't do.  She can stand!  The gown does wonders to keep her upright.    Since she can't sit, I'm not sure what to say here.  She meets the criteria of what most collectors of this size consider necessary, but the design prevents you from enjoying those benefits - it merely allows you to pay for them.   I hope Hasbro does a super-articulated version of the "General" outfit (or any at all), as this one was decent enough.  I look forward to something even more awesome.

You must have a better sample than I do. The head sculpt is sloppy and looks nothing like Carrie Fisher, and mine can only stand when posed mid-stride since here legs are uneven.