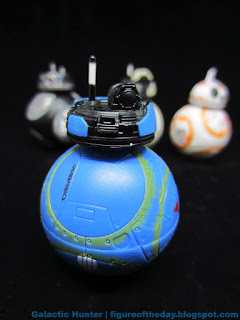 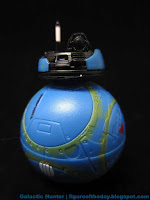 Commentary:  Droids have been a sneak preview figure staple since 2002.   Now that Disney manufactures the droids, their track record on giving us significant or recognizable figures is pretty mixed.  I don't yet know if 2BB-2 will appear in the new movie, but it looks cool. While made from the same silhouette as BB-8, this one actually has a new chassis - that blue ball doesn't match BB-8 or BB-9E in terms of its sculpt, but it's functionally similar.  The figure splits at the middle, with a weighted ball inside to give it the power of Weebles.  It wobbles, but won't fall down.   Unsurprisingly, this makes it better and more interesting than Hasbro's existing BB-8 figures... of which there are surprisingly few at the 3 3/4-inch scale. 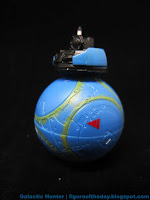 The figure is simple - the head turns, and you can split apart the body and mix parts with other BB droids.  This leaves the door open for Droid Factory BB part bins, and I hope this never happens.   It's too much, and so far these droids are sort of an unknown.  Everybody loved BB-8, but the figures are functionally dubious - we have no vehicles with droid slots, no playsets, and no arms to interact with other figures.  It just sits there and looks cool, and sports dark green rings, white markings, and some lettering which seems was poorly printed.  The letters are backwards Aurebesh.   Oops. 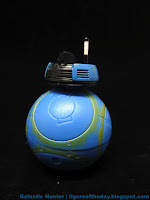 I like the head - it's incomplete, with an eye and lots of empty space. The antenna and copious horizontal vents feel very 1980s, sort of like an old car or an incomplete remote control toy.     The coloring looks almost like a globe of the Earth.   I have a lot of action figures, and other than Globey I haven't seen many that look like this.  It's neat, it's cute.   If you're getting the set anyway - which doesn't feel like much of a bargain given the figures' tiny size - this is one of the reasons to buy it.  To date, 2 of the 4 droids are not known to be upcoming Hasbro releases.

Aurebesh Notes: The white lettering reads "KNC" in one spot, and seemingly "BZM" on another - but it's mirror-flopped.  A big red "H" appears on the bottom too.   The black lettering on the top is also flipped - "KEEPCLEAR." I assume it was not intended to be reversed, but there you go. 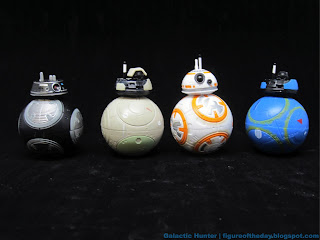 Collector's Notes: I got mine from Disneyland via my pal Zac.  Thank you Zac!
--Adam Pawlus