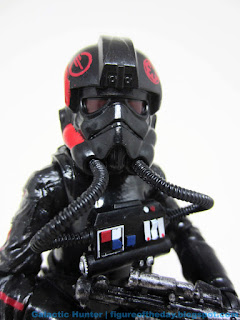 Bio: In the wake of the Death Star's destruction, the Empire created the Inferno Squad to ensure that Imperial secrets would remain safe.  Their fierce loyalty to the Empire and exceptional skills in both aerial and ground combat set this squad apart from the rank and file troopers. (Taken from the figure's packaging.) 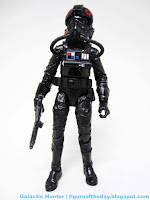 Commentary:  After hearing about the quality of the first Battlefront game and the miserable slog through Walmarts I took to find that game's figure, I'm just fine sticking to the toys now.  The Inferno Squad Agent is slightly more than just a redeco - the belt was replaced by a black Stormtrooper's belt.   How about that?   At least it's something.   The blaster is heavily weathered, and the figure has red stripes and red lenses on his helmet, plus a new Inferno Squad symbol on the shoulder and helmet.  It's interesting - but you can't help but smell the 181st Imperial Fighter Wing's legacy of red stripes on this "new" addition to the Expanded Universe.  (I don't care if they say it's canon, they'll trample it the second they can make a movie or TV show.) 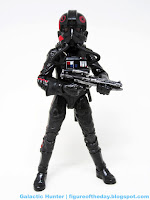 The chest box has newly colored buttons setting it apart from the previously released TIE Fighter Pilot and Lt. Oxixo, but only barely - you wouldn't notice without a side-by-side comparison. Mercifully the overall figure's red stripes and unique helmet markings set it apart from any and all TIE Pilots released to date, also frustratingly making it unique to the 6-inch size.  I doubt Hasbro  has any intention of making sure the 3 3/4-inch line is the main, complete one with all figures in it these days, but at least this pilot turned out well.     With about 26 points of articulation, it's a well-made figure with good, sturdy joints that are nice and stiff.  He's unlikely to collapse under his own weight, but finding the center of gravity may prove challenging.

It's a fine pilot - if you're buying troops, a little variety is nice and I enjoy the weird trooper exclusives.  I'd also like to see 3 3/4-inch ones, but I have a feeling the current regime is not thoroughly understanding that the collectors of that scale are being bored into exile.  Ah well.   Get this one if you can score it for a fair price.

Collector's Notes: I got mine from GameStop.  The nice lady at the store had a damaged box one and I got it for 10% off.  That's a good day right there.