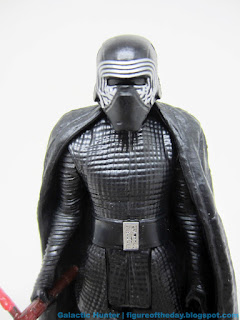 Bio: Kylo Ren, a Force-sensitive human male, was the Supreme Leader of the First Order and Master of the Knights of Ren during the era of the New Republic.  (Stolen from Wookieepedia.  Packaging has no bio.) 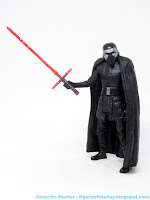 Commentary:  This is a weird one.  Kylo Ren in today's review is the Force Link 2.0 carded release - and it's dang near identical to the Force Link 1.0 pack-in figure from last year.  You can get that one at Ross for a couple of bones, this one has a different sound chip and a green symbol on the foot.  Is it worth it?  I guess?    It has a cape, a helmet, and a lightsaber making it a unique configuration until The Last Jedi figures if you missed it before.

Rilo Kiley has an issue being weighted forward a bit, meaning the cape helps keep him standing upright.  Our not-hero has 5 points of articulation and feels pretty sturdy.  I like how Hasbro made the figure with minimal paint applications - there's the silver on the helmet, the belt buckle, and some gloss on the boots. And that's it.  Figures like this make me think Hasbro could do a "low cost" figure assortment with unpainted or lightly painted figures some day, which would be a change compared to today where the assortment price comes out of a target cost of an average of the figures in the assortment.   Really good figures - like Ephant Mon - cost Hasbro a bit more, so seeing them create this line with a moonshot program of a $5 or $6 retail could be awesome for all of us. (This won't happen.)

This is a good figure with plenty of sculpted detail, whose only real problem is being a figure you may have bought, with a Force Link band, at a lower price, last year.  I love the clean paint job, the wonderful textures, and the pose is no stinker. A wrist joint would be nice, but since his hands match his arms it doesn't make sense for Hasbro to do one in the context of cost.  As of right now, Kylo Ren is one of the most fascinating characters in the saga - a bad guy, a little good, seemingly written as a weird wink and a nod to old-school fans while carrying political weight due to the iconography and the company he keeps.  How will he shake out in 2019? I can't wait to find out.


Force Link 2.0 Notes: "The darkness in me grows stronger." "I will let nothing stand in our way." "I know what I have to do."  Lightsaber hums, clashes, and bolts.  It's a good one.