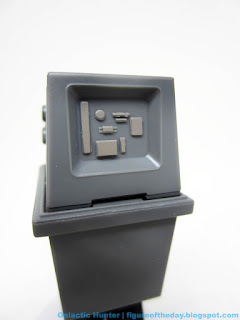 Bio: The GNK-series power droid, also known as the gonk droid, was a type of well-known power droid manufactured by Industrial Automaton that used binary codes. (Stolen from Wookieepedia.  Packaging has no bio.) 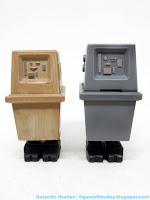 Commentary:  Disney manufactured toys with Hasbro at one point, but now seems to have no problem either borrowing tooling or copying figures and making new ones with quality ranging from decent to knock-off.  This Gonk Droid comes with the Sandcrawler Playset and is actually pretty great.  It copies the Target-exclusive brown Power Droid from a few years ago, giving you a similar appearance with slightly different engineering.  That figure had bend-and-swivel legs and ankles.  This new one has swinging legs like the 1979 Power Droid, and you can see traces of where the joints were on the sculpt. Clearly, they copied Hasbro's work and didn't do a good job cleaning it up. (The companion Jawa does this much worse.) 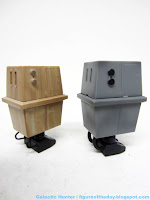 Aside form the weirdness of the copy, it's a good figure. The cables on the legs are different, and some of the interior details are different.   Also, both the "dome" of the droid and its interior have small holes inside for compatibility with things like Disney hats and the Sandcrawler's own grappling arm accessory.  It's a clean figure, painted in the 1999 CommTech Power Droid's colors.     I like how they copied most of the greebles, but the placements and sizes frequently change.  You'll even see some added color in the interior of its head, which was a real stunner.  Why add paint and sculpted bits on the hidden part of the toy?  It's weird, but a nice change of pace since Disney's droids tend to drop detail compared to Hasbro counterparts.  I'd say this is a lateral move - it's different enough to be interesting and worth your while. 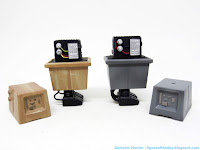 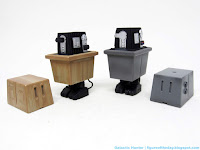 You will want this droid.  The Sandcrawler it comes with is no slouch, and if Disney sold it alone for $10-$13 I'd still recommend it. (Confidential to Disney - put it on a Vintage-style cardback in 1979 Kenner colors. Hasbro can't be bothered, so please fill the void and do this one. Thank you.)   I like how this figure changes things up a bit, but the vestigial articulation sculpt marks makes me feel that it's at least a little pathetic.   Granted, you won't be looking for those, nor will any children that receive this figure in the behemoth that is Disney's Sandcrawler.   Get the whole box if you can - and prepare to hate the Jawa.

Collector's Notes: I got mine from ShopDisney.
--Adam Pawlus