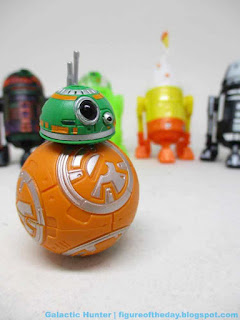 BB-BOO20 Disney Parks Halloween Exclusive
Star Wars Droid Factory
Item No.: ???
Manufacturer: Hasbro
Number: n/a
Includes: n/a
Action Feature: Comes apart
Retail: $12.99
Availability: August 2020
Appearances: n/a
Bio: All different types of Astromech droids populate the Star Wars galaxy. Each droid is different and has their own unique personality and colors. This droid resides at the sun-bleached dunes of Pasaana amongst the native Aki-Aki. Join BB-BOO20 on his adventures throughout the galaxy! May the Force be with you... and your Droids! (Taken from the figure's packaging.) 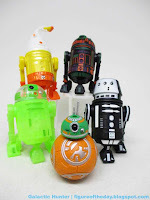 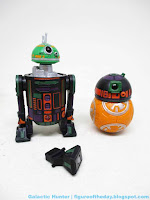 The gimmick this time is to make the build-a-BB mold look like a pumpkin - and Disney succeeded. The orange ball has silver markings (I would've gone with black or some sort of glow in the dark paint) while the head is green, to look like the stem from the vine. Sort of. I admit, when I first saw this it didn't read to me as a pumpkin at all, and certainly not as a jack-o-lantern. It looks neat, the colors are charming, but it's not quite as obvious as the ghostly, skeletal, or candy corn predecessors. And I still don't know R2-BOO16 was going for other than looking like the colors you would assign to a Halloween-themed tag cloud. 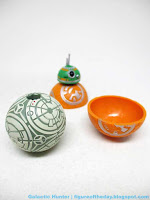 Inside, BB-BOO20 has a bone-like core. I appreciate that. Or maybe they were trying to go for a pumpkin seed/gut look? They could have left it unpainted, but instead took the pea soup green plastic core, painted it with some boney highlights, and painted some inner lights on top of that. This is overkill - but if they're going to charge you $13 for a BB unit that's probably really only worth $5-$7 tops, at least you got some extra paint out of it. Even if you can't see it. 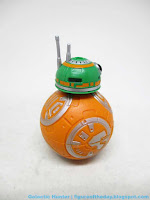 The holiday droid category is fascinatingly weird - some of these guys look like they could fit in with your movies, and Disney certainly did write a little story placing each and every one of them off-camera in movie or TV settings. I don't think it's essential, in part because I don't believe Hasbro is ever going to build-out The Rise of Skywalker or Pasaana, and "holiday" stuff is kind of an odd duck here. I could see this guy rolling around on a sail barge or in the back of a Sandcrawler, but he doesn't have a great place in a diorama just yet. But he's orange and green, so I love the colors and it's the kind of weird and ugly thing I love in my droid collection. My ridiculously large droid collection. Did I mention Disney alone offered more droids in the last decade than Kenner made total kinds of figures in the 1970s and 1980s?

Collector's Notes: I got this from a third-party theme park seller. Which I'd recommend - $20 or so for a $13 figure is quite the mark-up, but shipping, tax, parking at a theme park, $7 doesn't seem quite so bad.