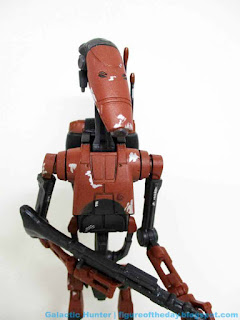 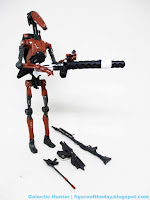 Commentary: While I haven't played the recent generation Battlefront games - or really, anything since the EA handover - I do like this Heavy Battle Droid a lot. I don't know if it's worth the $5 premium over the regular droids, but you do get two additional blasters - a Sandtrooper rifle, and a First Order Stormtrooper cannon. There are no new molds in this pack, but the deco and configurations are mostly unique in this set. 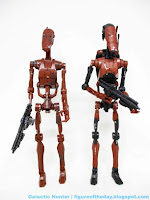 The droid deco is mostly red like on Geonosis, but with additional dark grey markings and totally different battle damage. It's different, but good - I almost wish they kept adding stuff, like maybe a white panel on the backpack to bring it even more wacky detailing. The damage scuffs all look great, and he's just as good as the other droids in terms of enhanced articulation with moving wrists, ankles, and tons of arm articulation. This is a figure that gets more and more impressive the more I look at it, especially since it can crouch down and somehow remain standing hours after holding up a heavy rifle. I don't know how it does it, but these are some good joints here - and they're all integrated into the figure in a way that isn't remotely obtrusive. I don't assume it can stay for months or longer on a shelf without support, but anything this spindly that can stand on my desk for a day with a giant weapon is worth citing as impressive. 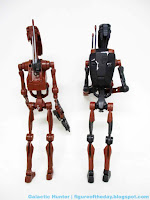 The Battle Droid blaster is unpainted this time, with no scuffing or battle damage. It's a lighter dark grey color, so it looks like an action figure weapon. Other releases with Padme or Battle Droids tend to be black and weathered. Similarly, the Sandtrooper rifle is all grey too - but in all fairness, some of them are. The antenna on the backpack telescope down and up, and the cannon has an articulated grip. It's also missing a piece from its Amazon (and later shared) exclusive Stormtrooper release, which I still need to open and review. It's missing part of the rifle near the grip from the other release that serves as a support stand - they're all like this, so it's not incomplete - but it does set it apart from the other release. 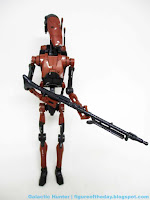 While in no way essential to any movie collection, the Gaming Greats line has been a great collection of repaints (and retools) for fans - I wish they numbered them, too. I love the whole idea of "familiar troops with new weapons fight new battles further along in the timeline," because that's how I played with my toys as a kid - seeing Battle Droids running around with First Order gear is perfect. I'd love to see more of this kind of thing (not necessarily from the games) in the toy line and storytelling, because it's fun and it encourages you to try your toys in new combinations. I'd strongly recommend this figure, but I like weird things.