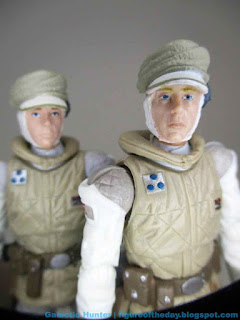 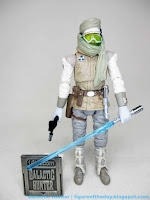 Commentary: It's back! Why? It was pretty expensive from the 2012 release. The Luke Skywalker (Hoth) release from 2021 is very close to the 2021 original, seemingly with the same colors and paint masks - at first glance. There are some subtle differences, and it may be so subtle you don't even need to bother unless skin tone means a lot to you.

If you have and are happy with the Luke Skywalker (Hoth Outfit) from 2012 [FOTD #1,830], this is mostly an improvement. There are surprisingly few deco changes - the head and the boots are the most obviously changed. The main selling point is photoreal face deco, but there's more to it than usual. The 2012 release has the flesh color painted over a plastic head - the 2021 version is molded in the flesh color, so it looks a lot better to begin with. The lips are now painted, with slightly more subtle eyebrows and more realistic - less doll-like - eyes. Without a doubt, it's the better head. The straps on his boots are now off-white rather than white, and the rivets on the holster for the 2021 releases seem a tiny bit sloppier than the 2012 release - but it varies from figure to figure. 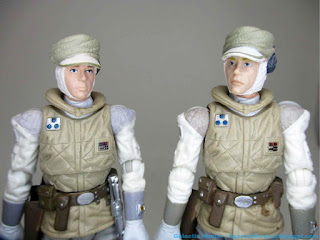 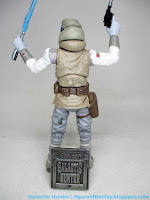 Unlike some other rereleases, this was already a good figure - while there were no thigh swivels in 2012, he did have improvements like lateral hip movement to straddle a Tauntaun. (Which, I should say, Hasbro needs to consider reissuing as well.) The joints are much more nicely integrated into the body than some of his contemporaries, with great shoulder movement and a subtle cut on the gloves for wrist movement. It's very nice. The accessories fit where they belong quite nicely, and everything is kind of perfect. It makes sense to reissue this figure, because other than maybe a variant head there's not much room for improvement. Unless they wanted to go off-model and give us the 1982 deco, but that's probably a few years off.

If you have the 2012 reissue - especially if you keep the goggles on - there's absolutely no reason to upgrade. If you want the mold with the best possible human head, rendered in plastic that much better brings the unique cleft in Mark Hamill's chin to life, you've just got to get this one. There's a reason it disappears quickly from store shelves - it's very good. An all-new mold could be a little better, but I can see why they just decided to improve the one that was already manufactured. Get it if you have the inclination!