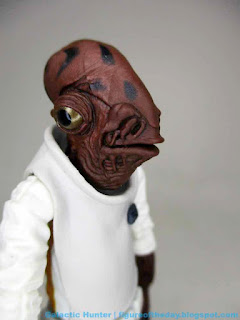 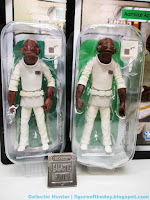 Commentary: It's back! Why? The Admiral Ackbar release from 2010 was pretty good. It also was, for a very short time, kind of expensive on the secondary market - the 2010 release, that is. After a spike, it stayed at around $30ish, which is - as much as I hate to say it - not unreasonable for a recent $10 action figure. Along with fixing some of the best figures of all time, getting stuff out for fans at a more affordable price has been part of The Vintage Collection reissues' reason for being. Having said that, I thought the first release looked fine and its price was low enough to not warrant a rerun - I guess they must have had the tooling in good working order? 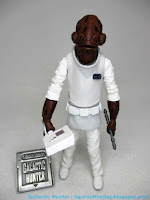 If you have and are happy with the Admiral Ackbar from 2010 [FOTD #1,416], I don't think you need this one. The eyes seemed brighter than the darker gold of 2021, but the costume is more or less the same color and the skin on the figure (and packaging) in 2010 were a much lighter red - which is how I remember the figure. After all, Admiral Ackbar was one of my absolute favorite Kenner toys as a kid.

There are subtle differences in shading between the two figures, and if you put them side-by-side you'll notice the paint mask for the yellow stripe on his pants was changed, but does it matter? It will to some of you - but even completists may not see a reason to upgrade. 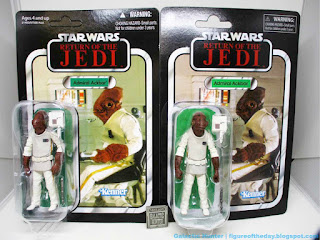 While this was a pretty great figure in 2010, in 2021 it really does feel dated. He has only 18 points of articulation, which is amazing compared to what we had in the 1990s but there isn't much articulation in the hips - and no ankles. The forearms swivel, but there's no movement at the actual wrist. There's no way for him to sit in a chair (if Hasbro ever made one), so he can't have his console device across his lap. While there is hip movement, the legs are blocked by the tunic's stiff rubbery plastic. It probably doesn't matter since these figures - sadly - were not designed with playsets in mind. Also there will likely never be a deluxe Admiral Ackbar with a chair, nor a playset for him. 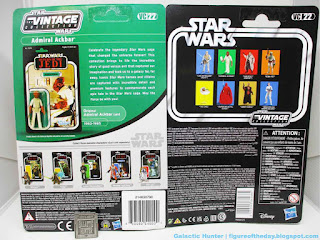 In short, it's basically the 2010 release with darker skin. The mottling is different, but not significantly so - it's like they took the old molds and gave you new paint masks and possibly truer-to-the-movie coloring. I'm unsure just how red the mask was in real life, so to me this seems like it's probably too dark. I don't have access to the Lucasfilm archives or 4K film transfers though, so I don't know what to tell you. I am happy with the previous version, but this one is an excellent substitute - and cheaper - if you can't get the original for yourself.

Guess the reissue or refresh helps new fans and those who missed it earlier to pick it up. Also helps the toy companies keep their cost down, since they can recycle the earlier tooling too. Yup would be cool to have a bridge set with a command chair for Ackbar. Maybe something I would be tempted to get.