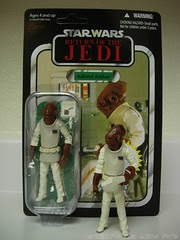 Image: Adam Pawlus' kitchen in front of his cardback.

Commentary: As a kid we all have our favorite figures. Most of mine were from Return of the Jedi, as my well-worn Admiral Ackbar can attest to. He hung out in toy helicopters, borrowed Luke's landspeeder, and generally kicked butt-- plus he had that whole musical bit in the Classic Creatures: Return of the Jedi TV special which really struck a chord (ha ha) with me. And then ToyFare magazine gave him a strong second life by playing up what eventually turned into one of his many catchphrases, specifically "It's A Trap!" Even if Star Wars wasn't a big line for Hasbro, odds are this character-- right now-- would sell well courtesy of the novelty of him as a pop culture personality.

The figure is pretty much perfect. Fans will undoubtedly whine about the lack of ankle articulation, but all this character did was stand around and sit, so without a chair most articulation below the waist is pretty much worthless anyway. He has ball-jointed (or equivelent) shoulders, elbows, and knees, a ball neck, plus swivel wrists, hips, and waist. 12 points of articulation is nothing to sneeze at, particularly when the attention to sculpted detail and coloring is this perfect. The yellow stripe is here, the dark red skin is here, and the fishy eyes are about as close as you can probably get without some new technology being invented. He can't sit too well due to his garment covering his upper thighs, but I'm sure you can cram him into a Y-wing if you really wanted to do so.

Thankfully, he has no problems interfacing with his accessories. I'm totally stoked Hasbro included updates to the old Kenner gear, even if it makes no sense-- his bizarre ribbed baton is a strange piece and rather making jokes that would drive this into adult territory, I'm just very happy to see this unique piece of equipment included. Each hand can grip the viewscreen or baton with little problem, and you can use one or both if you're so inclined. The clothing is wrinkly but not too wrinkly, and his face has just the right amount of personality. Hasbro basically Admiral Ackbar, and I don't expect we'll ever see a new sculpt unless Vintage makes a comeback in the far distant future.

Collector's Notes: This was Hasbro/Kenner's third Admiral Ackbar figure. The first was in 1983 and had proportions similar to the 2010 release. The 1997 version had lighter coloring and was severely beefed up, plus had a snap-on wrist cannon or communicator or whatever. This one is arguably the definitive one, bringing Tim Rose's puppet to life in a way that will probably never be trumped as an action figure. Until they can do blinking eyes, in which case I'll be impressed when 2042 comes around. As a new release its fate remains unknown, but I would be severely disappointed if it didn't end up being a huge hit.

Packaging Notes: The back of the packaging shows two figures which are not out now, and not known to be coming in the next two waves-- if you see one in the wild, take note of the Yoda and Wedge Antilles figures which, presumably, are all delayed until 2011. Other figures shown include Wicket, Luke, and R2-D2-- all of which are out now. Also, this is the first wave of Vintage to surfaced with unpunched cardbacks which may result in super-mint figures being something of a desired commodity. Order online or get them out of the back rooms, but good luck chasing down the most perfect of the perfect!

wicket gets ankle joints but not the admiral...other than that awesome figure!