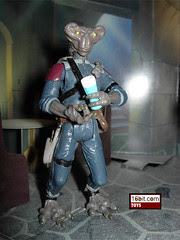 Bio: Hem Dazon, one of the more infamous reptile-like Arconas, is enjoying a drink at the Mos Eisley cantina when trouble suddenly erupts. An old Jedi Knight and a young boy suddenly tangle with two "wanted" men. Using a lightsaber, the Jedi Knight disables both men rather quickly. Being accustomed to outbursts like this at the cantina, Hem settles himself after the skirmish and goes about his business. (Taken from the figure's box.)

Commentary: The first alien we encountered at the Mos Eisley Cantina was Hem Dazon. Hem Dazon was a head on a stick-- there was no outfit there, Hasbro got to fabricate one. (Galoob did the same thing in the late 1990s.) As such, there's a good reason this character may look a little more modern than his siblings, as Hasbro got the benefit of referencing nearly 30 years of creature design before selecting this specific outfit and unique leg structure which rumor has it was inspired by existing Expanded Universe sources, but I'm not so sure about that. It's a nice design, but he looks a little more formal than the approved backstory would have me believe given the dude's supposedly a junkie and not some sort of military or police person. Maybe he's an intergalactic FedEx guy.

The design itself is mostly pretty good as a toy, but falls apart in the legs. These weird designs aren't conducive to long-term standing and it's not unusual to see him sag, tipping over forward ever so slightly with time and heat. As such, be careful if you plan on keeping him out long-term. There's a great amount of detail in the exposed skin, wrinkly skin has mutiple colors on it to bring it to life nicely. Even the eyes are really swell, gold with a hint of green-- again, this references the back story of his species being addicted to salt. With 12 points of articulation it's a pretty good release, and if you're careful you can pose him on a bar stool, too. Unfortunately, standing up is a little more important, and that's not exactly his finest skill-- unless you live in a really cold climate, in which case he might be just fine. (Heat softens plastic just a little and may be all a figure needs to tip over if unattended to for a few weeks at a time. It's rare, but it happens in some figures.)

Collector's Notes: There's a variant in the glass-- some have an opaque blue glass, while others are clear. Neither is more desirable. The figure has never been reissued and this is the only Hasbro toy of Hem Dazon to exist at press time. Given sales of minor Cantina aliens, this will likely be its only release. He goes for below SRP in most cases, so don't feel like you need to overpay for this one.

They could've went with a simpler design, but chose a good outfit along with the now-cliched holster; every other cantina denizen has one.

As to consumer response. Screw them. When I was a kid I liked cool aliens, obscure or not. Bah.

one of the most noticed aliens in the whole cantina since he pops up first! Love this figure!