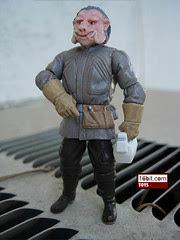 Bio: On Cloud City, Ugnaughts operate the carbon-freeze chambers that are typically used to freeze Tibanna gas but can also freeze living matter. Ugnaughts work in Bespin's Tibanna gas processing plants or as general laborers in the city. (Taken from the figure's cardback.)

Commentary: Short figures generally don't get a lot of articulation-- instead, they get more gear or a second figure. This Ugnaught just got more articulation. This time around, he has a new head and a new, for lack of a better phrase, "belt." The skirt part, that's new. He also sports a new deco and is colored differently, effectively making him a fairly different figure and a must-add to your collection. These Ugnaughts are fairly different from the 1998 releases, which were known in some collector circles as being some of the worst sellers in the POTF2 days. Thankfully this one did better and was a stronger release, but do you really need knee joints on these guys? Probably not, but it doesn't hurt any. The sculpt is good, the deco is good, really the only reason you wouldn't want to buy this figure is if you don't like Ugnaughts. Hasbro seems to always do a good job on these guys, and who can really settle for having only one or two? Get a bunch. They can populate the jumbo Carbon Freeze playset Hasbro will never make.

Collector's Notes: This figure was in pretty short supply, but sat in some spots. Interestingly, the packaging for this figure (and the previous version) show both figures on the illustration, but neither appeared on both styles of packaging. Weird.

Email ThisBlogThis!Share to TwitterShare to FacebookShare to Pinterest
Labels: The Empire Strikes Back, TLC, Ugnaught

Is headswapping with Ugnaught I possible for a little more variety?

I missed this one, but got the prior one. Sizes of the Ugnaughts vary, but overall aren't these a bit too big in terms of movie accuracy? These guys should be significantly shorter than Leia, who's is pretty short in her own right.

Too tall is probably better than too short in most cases, but scale is still an occassional issue with Hasbro's Star Wars.

That said, I'd probably get future releases based on this, if there are any. A new gloveless Ugnaught would be nice.