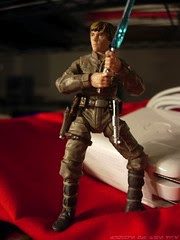 Commentary: Bespin versions of Luke Skywalker have historically been a place where Hasbro (or Kenner) tries out new things for the character. Even the 1980s version was unique in that it had a sculpted lightsaber hilt on his body and he was the first Luke figure to include a non-telescoping lightsaber! In 1998, he was the first Star Wars figure on retail shelves with wrist articulation-- specifically, a removable wrist. The 2002 version incorporated blood, magnets, huge accessories, action features, and more for under five bucks. And the 2007 Vintage release? Well, this was a unique experiment in Hasbro releasing a substandard figure at a premium price. The 2010 edition of Bespin Luke is, on the whole, fantastic.

Nothing will ever top the 2002 release in terms of greatness for its time-- that figure included so much stuff and integrated so many play features, it's in a different league. With the 2010 version, Hasbro aspired to making the best Bespin Luke a collector could ever hope for, and I think they nailed it. With 14 points of articulation and a greatly improved sculpt, Hasbro seemed to take the criticism to heart of the previous release and made good on its flaws. This time around, Luke can hang a lightsaber on his belt. His hair doesn't look vaguely like Haley Joel Osment. While the figure's new hip articulation allows him to be posed in more combat-friendly poses, it does make it significantly more difficult for the figure to sit in a vehicle-- or at all. Articulation on this figure is so well-hidden that initial photos caused some fans to complain that the company removed ankle articulation-- which, it turns out, was there all along.

As upgrade go, this one will most likely be a huge treat to collectors. If you display your figures in or out of the package, you will undoubtedly get the most bang for your buck out of this one. However, the accessories from the 2002 release are so good that you might want to make sure you get one of those, just to pilfer the antenna, the bacta tourniquet, and maybe the lightsaber with its metal handle. This one looks better, but the 2002 is indeed shiny. One thing about this figure-- and many others-- I don't understand is that the lightsaber with the blade actually has a tab on it for hanging on the belt. Having a fully-lit lightsaber hang off Luke's belt doesn't make a heck of a lot of sense, I would have to assume it's the result of a factory communication error because, really, why would you do it on purpose?

So yeah, get one if you like his look. Barring a breakthrough in sculpting and construction techniques-- or a decision to let the G.I. Joe team take a crack at it-- odds are the character simply cannot improve much beyond this point. Once Luke can do the splits, where do you go from there?

Collector's Notes: This figure is available on the vintage cardback in both normal and "chase variant" varieties. The "chase" version has silver foil for the logo and border of the photograph. The Jedi Knight Luke that just came out this week is indeed way more awesome.

What are the odds Hasbro will let the G.I. Joe design team make some "Deluxe" Star Wars figures? That would be awesome!

This version of Bespin Luke is pretty much the best we are ever going to see. Barring some unforeseen breakthrough in action figure technology, it would be virtually impossible to top this guy. Great job, Hasbro, now please, don't make him again. Just re-issue this one. :)

Agreed with the above. This figure may be the pinnacle of what can be achieved in the 4" figure format.

I haven't opened mine, but can you remove the hand on this one?

the only thing seperating this figure from perfection is it needs an alternative "battle damaged" head..you see where im going with this? it was the same flaw i managed to corrct with the hoth leia, but now im trying to do the same with this figure without breaking the bank..your blog is ingenious..i feel like your talking to me personaly on it (I didnt mean for that to sound as stalker-ish as it did lol) but i sooo look forword to whenever i have free time to read your blog..i actually feel i have some to contribute as a customizer/critic/star wars and action figure geek/ and generally pretty artistic person..feel free to hit me back at juggalojedi666@hotmail.com and ill send you some pics of how I "perfected" hoth leia...i share your opinions so far on just about all the figures, espicialy embo..you should do a catagorized top ten....i would love to see that....

There's the side moving ankles like on Clone Wars Mace Windu.

So yeah, they could go further. Should they? I don't know.