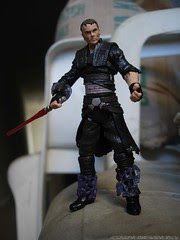 Bio: Set in the dark times between the fall of the Republic and the rise of the Rebellion, Star Wars: The Force Unleashed video game explores the aftermath of Order 66 and the continued evolution of Darth Vader. The son of a fallen Jedi is abducted by Vader to be his secret apprentice. As a young adult, the apprentice must choose his destiny: Join Lord Vader and wipe out the remaining Jedi, or become a noble Jedi and bring hope to the galaxy! (Taken from the figure's box.)

Commentary: Rather than release it individually, Hasbro only put out figures of the Secret Apprentice in gift sets. I have no idea if this is a strategic move or just an accident, because as it stands today there was never any way to get the main character from this popular game series at retail without dropping north of twenty bones. The figure itself is pretty good, with 14 points of articulation and lots of clever sculpting bits to mask the articulation. A glove here, a torn sleeve there, it's almost like Hasbro and Lucasfilm conspired to develop a character that translated into figure form without too much difficulty.

Due to the lead time of the figure's release, it was fully sculpted before Sam Witwer (the actor behind the apprentice) was revealed as part of the cast for the game. As such, the head doesn't really look all that much like the in-game character, leaving the door wide open for Hasbro to rerelease this figure with a new head were they so inclined. (It would make a nice vintage figure, wouldn't it?) Starkiller (his name in the game, Galen Marek in the novel) sports all the necessary accessories, which means he has a lightsaber and some "lightning" things that go around his wrists or ankles. These were originally said to be some sort of "Force shackles" but it seems they're just here for decoration and serve little purpose in the game, unless you just want to pretend it's a manifestation of Sith lightning. The figure is, on the whole, pretty great and can stand, sit, and do all those combat things you would want him to do. He's just a head away from perfection, and as soon as Hasbro includes that head on this body the world will be a better place.


Collector's Notes: Individually, the loose figure sells for about $15. The complete set with this figure and the "Jedi" and "Sith" versions of his costume goes for $20-$25. I'd suggest just getting the whole set.