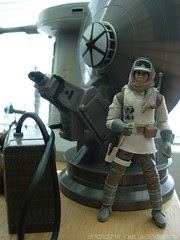 Commentary: The story of this particular Hoth Rebel Trooper was delayed for over a year, thus temporarily making it the hottest, most-desired figure on the market. This was back when no units were available, today it's just another exclusive in Target's massive Fall 2010 Star Wars push with over $325 worth of toys all being released on the same day. (If you want to help about collectors, Target and/or Hasbro, obfuscate how much money we spend on this stuff. It makes us all happier.) Actually, it isn't just Hasbro and Target, but a massive torrent of Blu-Ray movies, video games, and other consumer gear all hit around the end of October this year. It's really ridiculous... in the same way this Hoth Trooper figure is an excellent figure. (SEGUE!)

This is a figure that completely meets expectations. If you got the 2009 beardo trooper, you can predict exactly what this figure will provide with almost total accuracy. He has 14 points of articulation, a removable hat with scarf, a backpack, a holstered blaster, and a blaster rifle. The figure's body is fundamentally identical to the 2009 figure, which is pretty much exactly what I want to see so nobody asks me when Hasbro will make the 2009 variant we never got. I can just say "here it is, this is it, now please don't whine at me for spending $40 on this set because it's worth it for the K-3PO build-a-droid figure, the other beardo trooper, and the two giant guns."

This figure can stand or sit just fine, plus has no problems holding his accessories. It's a little tricky to position his hat just right, but such is often the case with full-head coverings on action figures. If you're at all waffling on getting him (and his set), stop-- go to the store and buy it. All 3 figures are new, the giant radar laser cannon is 100% new and huge, and the redeco of the laser turret is indeed different and slightly improved. This is not a "just different enough to make you mad" situation, the resulting changes on all 5 items actually made me happy to buy the set.

Collector's Notes: The story of this particular Hoth Rebel Trooper is one of the more interesting tales in recent memory because the figure was actually supposed to be out in summer 2009, and individually carded. It was planned as a running change for the bearded Rebel, but factory communication errors resulted in the change not being made, Hasbro having no slot to get out another one in time, and a ton of confused fans. Seriously, I had people asking me for months where they could get one and nobody even saw a carded sample. Hasbro's own Q&A insisted it was indeed still coming while I banged the drum in my Q&A saying "nobody's seen it and it's probably not coming any time soon." I'm glad that I was ultimately wrong about it not coming out, because it's here, and it's well worth owning. The figure is, at this time, only available in Target's big gift set.

The set itself is 3 figures and 2 large accessories for $40. While not a bargain, it's acceptable-- figure that the 3 figures are each about $7, and the guns are easily worth $10-$15 each, and it's actually a pretty good purchase. Since the turret is different from the 2007 release, I'd say this is particularly worth getting for diorama makers and army builders.

Email ThisBlogThis!Share to TwitterShare to FacebookShare to Pinterest
Labels: Exclusive, Rebellion, The Empire Strikes Back

Given that it wasn't the super deal like the battle pack that originally included that turret, I was reluctant to get the set. But those who are interested in any part of the set (like just the figures), should realize that most of the pieces will gain in aftermarket value after these sets disappear from shelves. You may or may not recoup some of your cost by selling off the parts you didn't want now, but I suspect you will be able to later. I doubt the guns and K-3PO will see release again within the next year.

But anyway, while I would've liked a bit more contents in that box, all the pieces in the set are good and worth keeping IMHO.

What happened to the remote control for the Anti-vehicle cannon shown in the prototype shots? It's strange and frustrating not to get this accessory, especially as he is supplied with the new cannon.