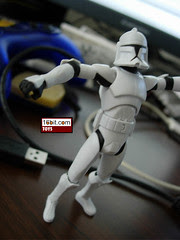 Bio: Commando Droids capture a Republic tracking station from clone troopers. The station guards the cloning centers on Kamino that are vital to the Republic. The clone troopers, — all rookies — who man the station are killed or forced to retreat. When two battle-hardened clone officers arrive, the inexperienced troopers join them in a fight to retake the station. (Taken from the figure's cardback.)

Commentary: So, why is this Clone Trooper worthy of his own entry? It's different. The figure uses the 2008 body (super-wrists, ball ankles) and the 2009 helmet sculpt (pointier visor, other minor changes) and gives it a plain white look. It's slightly different than the plain white clone with the RC Hailfire Droid, but more on that later. The funny (and slightly sad) thing is that this was the only Clone Trooper figure available in plain white for most of 2009 and 2010. Why Hasbro neglected putting out a boxed set of them or individually carded ones is beyond me, but I guess it drives up demand for a popular figure that you don't want just one or two of. Obviously, you probably have a good number of Clone Troopers-- so this one is worth getting if you want the Droids he comes with, or you need every style of Clone money can buy. I like it, but it isn't too much different from the plain white "clean" troopers sold in late 2008 and early 2009.

Collector's Notes: This set is still popping up in some stores (like Costco and Ross) as of the last couple of months. With the three Commando Droids, it's a fun set with lots of gear and battle opportunities. It's also from the episode "Rookies," and you may not yet realize this but you are required by law to own all the toys from that installment. Here's hoping the giant eel comes next.