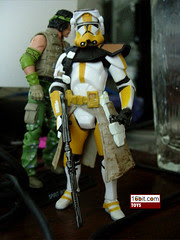 Bio: Clone commanders were part of ARC trooper Alpha's advanced training program that allowed certain clones to maintain a sense of individuality and independent thinking, critical to the role of leading the infantry forces in battle. (Taken from the figure's box.)

Commentary: In late 2005 there were multiple variations of Commander Bly, including a hard-to-find one with a dark brown stripe down the front of his helmet. In 2007, when this version came out, Hasbro opted to use the previously released incorrect version, leaving the dark brown one in a bit of a lurch. But wait-- did I just say this is a release of the 2005 version? Well, sort of. The 2005 version of the figure had battle damage, this one is "clean" (the armor is, anyway) and has different guns. The base figure is based on the 2005 Clone Commander mold, which itself had 14 points of articulation, holsters for his pistols, and an articulated "binoculars" gizmo on his helmet. It's pretty swell, really, and my notes show that this was the final movie version of Bly to see release to date. That means that the door is still open for Hasbro to put out a corrected repaint, possibly using one of the newish molds they have in circulation.

Since the 2005 versions had battle damage or a corrected paint job, those are arguably the ones to get right now. It's probably just a matter of time before Hasbro cranks out a new version, though, so you can probably safely wait for a new one in the next 2-3 years. (Probably.)

Collector's Notes: Like a lot of Target exclusives, this set was a hot seller and then languished on the shelves. You could get them on clearance, but the toy has mostly recovered and you should be able to get one for about the original retail price.