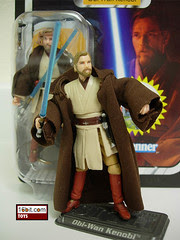 Bio: The Jedi Knights ordered to rescue Palpatine have suddenly crash-landed on Grievous' flagship. In an amazing display of Force knowledge and athleticism, Obi-Wan Kenobi ejects from his starfighter, swoops through the air and cuts down dozens of battle droids with his lightsaber. As he and Anakin Skywalker battle through the ship, they defeat the evil Count Dooku, rescue the Chancellor and barely land back on Coruscant in time for a heroes' welcome. (Taken from the figure's packaging.)

Image: Adam's kitchen. The loose figure is the 2006 release, the carded one is the 2010 Vintage release.

Commentary: If you're going to reuse a mold, reuse a good one. The 2006 Obi-Wan Kenobi from Revenge of the Sith improved on an already great figure, adding cloth robes which allow the figure to look like he doesn't know how to hire a good tailor. On the bright side, they do allow the figure to sit or engage in actions of some sort while wearing them, and that's a huge plus. The figure has 14 points of articulation and his lower plastic robes are flexible enough that you should be able to get him into a ship with minimal problems. The sculpt is pretty good, as Hasbro gave the figure a good range of movement and the clothing shows a fair amount of detail. The head is a decent likeness, and you'll notice some very subtle greying to the sides of his hair. There's not much Hasbro could really do to improve the figure's appearance short of finding some plastic that just happens to make it look a tiny bit better, so it's reasonable to see this release on the market again.

Since it looks good and plays well-- his lightsaber hilt plugs into his belt nicely, for example-- you really ought to get some version of this figure. There are several-- this is about as good as any, depending on which accessories you want and how much you want to pay for it. I'd say there's no harm in picking up this one if you're so inclined.

Collector's Notes: This mold is one of Hasbro's most reused. It started out as a "Pilot" Obi-Wan in 2005, and this version in 2006 was the second take on it, now with a cloth cloak. The 2010 Vintage release builds on the 2006 version, adding the communicator gear from the 2005 release but dropping the stand. Given the prices, the 2006 version may be a better bet. A 2008 version of this mold added hip articulation and a newly sculpted head. It is not known why that version wasn't made for the 2010 Vintage release since it is arguably Hasbro's most advanced. There are other figures that use this mold, but I don't have all day.

This is just about my favorite figure Hasbro has ever done in any SW line (he also happens to be just about the only good version of this particular Kenobi, but I digress). He's everything a figure is supposed to be -- great likeness, excellent toy, and a masterful rendition of an iconic character. He's so good that I don't mind that he's been re-issued 87 times. One of Hasbro's best efforts.

I'll wait for the ball-hip joint version. I thought this release had that until I read your review.