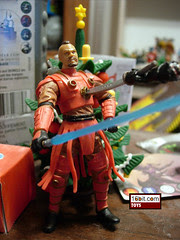 Commentary: This set went from being a good seller to a pegwarmer pretty quickly, despite the Purge comic inside being something of a hot item at the time. Perhaps it was the characters-- Koffi Arana is relatively unknown despite actually appearing in the movies (techinically), but not in this costume. The hotheaded Jedi wears unique armor for reasons I'm not quite clear on, but the design does allow for a really cool spoiler/action feature. Darth Vader's severed arm is included holding a sword, and you can plant that sword in a groove on Koffi's torso. Pretty sweet!

The figure is an accurate translation of the costume in the comic, complete with goofy red tassles and gaudy red accents. Hasbro recreated it nicely, but since it was during a period where not all figures had super articulation, you might find it "old." It's good though-- 12 points of articulation and cut elbows are better than nothing at all, and when this figure rolled out in 2007 this line did wonders to bolster our comic book character ranks. He isn't as fancy as modern figures, but he also was packaged with Bultar Swan (also a new sculpt) and a full-size comic book reprint for ten bucks. Complain all you want, but these sets really got you your money's worth. Very few other characters from the orignal Purge comic saw release, but it's nice to see that Hasbro picked one that got stabbed through the chest. That's pretty hardcore, and it's not like a lot of lines have the balls to put in a toy aimed at all ages where somebody is impaled on a sharp object. Kudos, Hasbro, for trying something different.

Collector's Notes: If the Kmarts nearest you really suck, you might still have these around, and the price might be higher than issue price because the assortment (87504) shipped from 2007-2010 and was increased in price during that time. (This is kinda complicated, but this is a problem that happens when you don't discontinue old SKUs-- dead weight and unnecessary price increases.) Because it hung around forever, you can probably score this for under $10 if you do some looking around.

This set had me at "flying severed hand of Darth Vader."

The pack he was in was one of the worst sellers, maybe not as bad as Xizor and Leia, but close. Yeah, those early Marvel ones everyone hated, sold better.

That the characters were unknowns to most casual fans was a factor, and I think gender and possibly race were also factors in terms of mass appeal. A lot of the comic packs had females, and that was good for collectors, but limited kid appeal (the idea that most boys don't want girl figures has some truth to it, actually.)