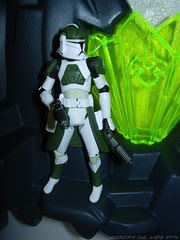 Bio: The commander of Bantha Squad is an expert in heavy weapons and demolitions, making him uniquely qualified to formulate successful strategies against the droids. (Taken from the figure's packaging.)

Commentary: This Clone Commander mixes several existing figures and new deco into a new whole. The head, arms, and torso are from the Clone Gunner, and the lower body (including skirt/kama) were later reused for the red Clone Trooper Commander figure, but debuted here. The holsters and guns are larger than that on Rex. You get a lot of weapons and a unique brownish green deco, and this particular combination of clone parts hasn't been used on any other figure-- no "gunner" helmet has ever been paired with the "commander" kama/skirt before. He can hold his weapons without a problem, and for me the real highlight is his unique paint job. "Bantha Squad" is a new construct which, so far as I can tell, exists only in the toys so far but since the TV show is still running, who knows what the future may hold?

The figure is basically what you see, with 14 points of articulation including the fancy wrists that everybody loves. The most distinctive feature on the figure is on his left shoulder, with a stylized bantha horn (or possibly skull) as the signature for the squad. That's one thing the line could really benefit from having more of-- specialized sub-groups you can collect. Sure, there's a lot of 212th Clones, but it's just a sea of orange. It's not like they have some badass logo of a dagger stabbing through a planet or something. This is pretty great, and I hope they do at least another 1-2 troopers to flesh out the squad. That or I'll just buy another set some day.

Collector's Notes: Like Clones? Buy this set, or two of it. The basic clones are great, and the specialized commander and jet pack trooper are also wonderful. It's rare that Hasbro gives you an entire squad in a box-- they do it, but not too often. Usually it's a jumble of things, or droids, but this time it's a unified set. Do yourself a favor and get one.

I like this set, but I want to know the Commander's name.

You only need one more guy to complete the squad (by clone wars definition, ala "Clone Cadets", a squad seems to be a mere 5 men), alas, the tragedy that the Battle Packs went from including 5 figures to 4.