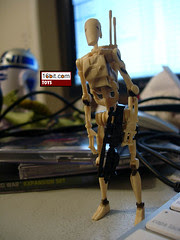 Commentary: Here's a mold that Hasbro repainted so much that you could have an army simply by buying every variant. Battle Droids are a mainstay in Star Wars lately, and this was Hasbro's cheapest version. You get two on a card, and it's about seven bucks. The arms and legs (and head) are removable, allowing you to swap them for bazillions of variations depending on what kind of damage combo you'd like to fabricate. It's pretty darned cool, really, but more articulated versions have since been released with different coloring. So what to do? I'd say grab a bunch of this 5-jointed wonder as cannon fodder and diorama filler, because you don't need them all to be the best when setting up a big fight. This figure is, on many levels, "good enough" and with several varieties to be had you may as well snag at least one of them. (I would not put this one at the top of your list, though.)

Collector's Notes: After being in circulation for quite some time Hasbro seems to have retired all figures derived from this mold as of 2010. We shall see, though.

Yeah, keep your fingers crossed, as they've gone back to using lesser molds before, especially in Legends.

I never got any of these, as I heard they didn't stand up well without a stand. That, along with the minimal articulation, were turn offs. It was interesting when they were shipping different variations, though. Nowdays either the logistics or the bean counters prevent them from that.