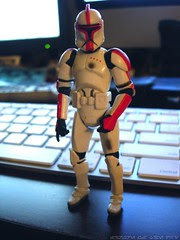 Commentary: What a difference five years makes! In 2005, fans were starving for more Clone Trooper action figures-- as of the end of 2003, Hasbro had only released a handful of the white armored warriors and only one of them had 14 points of articulation. In 2004, there were practically no new Clones, as the entire year's basic retail line was devoted to the original trilogy. (This hasn't happened since.) In early 2005 Hasbro shifted gears hard and fast, giving fans 12 Clones in the Entertainment Earth exclusive gift sets... and then hundreds more in the following years.

This one is based on the 2003 Clone Trooper from the original non-animated Clone Wars line, which was the very first super-articulated Star Wars action figure. He has 14 points of articulation, a distinctive red color indicating his rank as a captain, and some black spots which were what passed for Battle Damage in those days. Later in 2005 we'd see some pretty intricate designs in the Evolution line showing dirt and scrapes, but black blots were what was "normal" before then. He includes the short blaster-- again, something of an oddity at that time-- and this figure was really hot stuff for a while. Over five years later we have been treated to numerous carded versions of the figure with slight variations on deco and materials used, so that's one of the reasons this set isn't a ton of money on the secondary market. It's unique, but there are plenty of lower-cost similar releases to be had on the cheap.

Collector's Notes: The sets of 4 seem to sell for about $30-$35, which isn't bad. To date, the individual Clones with damage have not been sold individually, so if you want this variant, track down the boxed set. The individually carded Saga Legends (2007 with coin) version of the non-damaged figures are also worth snagging due to their plastic being a whiter white and the rank dots being placed more appropriately on the later releases. And yes, I consulted on this project, so I'm biased to like them. This set (and entire run) had multiple production runs and kept selling out, with this set-- "color battle damage"-- always selling through first. People have good taste.