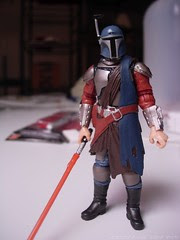 Bio: Galen Marek is the secret apprentice of Darth Vader and the son of Jedi. he is taken by the Sith lord during the Great Purge and given the codename Starkiller. Vader trains him in the ways of the Force and promises to reward him with great power. (Taken from the figure's packaging.)

Commentary: Hasbro really does know how to make the most out of a mold. They reused the same Jango Fett body for several releases, including this new Galen Marek. The head (a Sam Witwer-inspired sculpt), lower legs, and the robes over the armor are new, while the rest of it is just redecorated from the previous Evolutions Jango figure. A little paint goes a long way, and this figure does look like a completely new release at first glance. Aside from the flesh hands looking like gloves up close, it works perfectly and I think your average consumer would have no idea that this figure is mostly recycled parts-- but you're not average, are you?

It's still a great figure, but as a toy it suffers from that whole "not capable of sitting, ever" thing. I know, I'm old, but I do remember a time where all action figures that Kenner were made could sit down, and this lasted well into the 1990s. The figure has no problem holding a lightsaber and standing around looking cool, but the extra gear does prevent it from assuming some battle poses. The head sculpt is great and the detail is there, plus if you don't know the games and just leave the helmet on, it's like getting another Mandalorian figure. And we can never have enough of those. I never found this figure to be particularly exciting, but it's certainly cool enough to warrant picking up if you're getting the 5-packs anyway. He's great crowd filler too if you're in need of that kind of thing.

Collector's Notes: This set rolled out a little late and a little slow, so odds are you can still find one at a Toys "R" Us near you. Just look-- you might get lucky!

yours has no problem holding a lightsaber? mine drops the lightsaber every time anyone breathes on it. the jango hands weren't molded for a lightsaber so the grip is too loose. one big problem with part reuse right there.

I have the same issue with the lightsaber, but as this figure's on my Mando shelf anyway, it's not a problem.