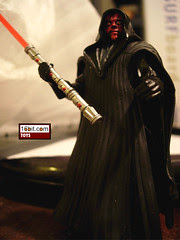 Bio: The evil Sith Lord Darth Maul learns the power of the dark side from his master Darth Sidious. Together, they plot to destroy the Jedi and enslave the peaceful planet of Naboo. (Taken from the figure's packaging.)

Commentary: For a character with few lines and fewer costumes, Darth Maul gets a ton of play in the toy aisle. It's hard to imagine a time when any Maul would be cause for celebration, but this was when the concept of prequels was not entirely soured for some fans and you could still be easily excited about new Episode I toys. This one was unique in that it had the large outer robes and limited articulation. Basically, it's a statue, and not a great one. He can hold his weapon, not exactly menacingly, while standing on a display stand. The limited arm articulation and virtually worthless neck and lower body articulation are blocked by additional robes which you can't even see due to the large clamshell of the outer clothing. This is a figure you should buy specifically if you think it looks good-- I think Hasbro has done better. The Tatooine Showdown Cinema Scene figure is pretty gorgeous and essentially replicates the same outfit, just in a significantly more pleasing way, so get that one instead if you need to be picky, because this carded Sith Lord is more a thing that you store than a thing you can play with or admire.

Collector's Notes: This mold was not reissued much as-is, but was used as the basis for the 2006 Holographic Darth Maul figure. It was also packaged with a plastic tumbler for a Target exclusive shortly after Episode II came out. Oh, and this original 1999 release is effectively worthless. I know, try to be surprised. You should have no problem getting a sample for $1-$5. In 2002 (or so) he was reissued as a Target exclusive, packaged with a plastic tumbler designed to look like the 1970s Burger King collectible glasses.

While yes, time has not been kind to this figure, I recall liking him a whole lot at the time and even though, again, the Tatooine Showdown Maul is more dynamic, I still like this guy even though he is a statue. He's still one of my favorites even though he has been far surpassed in terms of quality and articulation. And as we see from Clone Wars, the character still holds appeal...