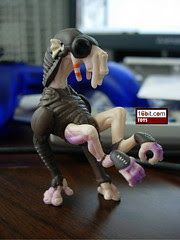 Bio: It is said that in all of Mos Espa, there is no better pod racer than Sebulba. A member of the Dug species, Sebulba is feared by his competitors for his aggressive racing tactics and nerves of plastisteel. Sebulba's success is due much to the fact that he will do whatever necessary to win, even if it means resorting to dirty tricks. His high performance pod racer is packed with certain "illegal" modifications used to eliminate fellow racers. On Boonta Eve race day however, a young competitor named Anakin Skywalker will give the infamous Sebulba a run for his money. (Taken from the figure's packaging.)

Commentary: Love or hate Episode I, there's no denying that it introduced some freaky and cool designs into the franchise. Mr. McCraig-- I'm sorry, I mean Sebulba-- has a leg for an arm, and an arm for a leg. He walks awkwardly and seems like some strange horse-ape-reptile creature, plus he talked funky and had a neat costume with huge goggles. Oh, and he was a jerk to Anakin. He seems like he'd be a natural fit for the basic carded figure line, but Sebulba would not be carded during the initial run of Episode I, sadly. This figure-- his first-- was packaged with his large Pod Racer vehicle, meaning the figure itself was engineered more as an accessory for that craft than as a stand-alone product.

Sebulba can stand on his own, but his little feet don't have foot holes in them and he's a little bit smaller than many perceived he should be. In this day of downsized R2-D2s and Chief Chirpas, though, I can't say for sure if this one was actually more accurate in terms of height. Maybe? He's certainly not bad. The sculpting seems primitive today, but for 1999 he was pretty great. Things like multiple shades of brown on his leathery racing attire was pretty stunning, as were the many shades on his skin and other little details on his costume. While not superb, he is a good example of how Hasbro managed to do some great stuff in the late 1990s, but is also a sign of how a lot of the figures from this film seemed to look a little pale due to the faded, unpainted look of their skin tone. For a figure released before the film, but created before the design in the movie was finalized, he's not bad. I wouldn't suggest you track this one down unless you also want his vehicle, but he's certainly not bad. It's just the Power of the Jedi version which would follow over a year later was better.

Collector's Notes: While somewhat popular in its day, the figure plus the vehicle are now worth about ten bucks. I'd say it's worth getting for that. It wouldn't stun me to someday see another Sebulba upgrade, but unless it's a Star Tours exclusive, I doubt we'll ever see his Pod Racer again. So yeah, get this one if you want it.

It's Selbulba's fault the Empire exists. Had he won the race, Anakin would've remained a slave.

The only Sebulba figure I owned was the cinema scene one.

i always liked sebulba, even as a kid.

although i like how his pod racer is "illegal" and not just illegal. it seems to imply "sebulba, you scamp!" instead of "sebulba, we need to have a word with you downtown"