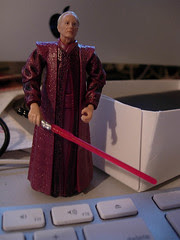 Bio: The Supreme Chancellor encounters questions about his ultimate motives. During a confrontation with Mace Windu, he uses his deadly powers and experiences unexpected and frightening results. (Taken from the figure's packaging.)

Commentary: This Palpatine mold was used for multiple releases despite not being particularly fantastic. It is neat because it transforms and has an action feature without being too bulky, but the toy only has meaningful articulation in the arms and neck. In movie years Hasbro tries its hand at honest-to-goodness "toy" figures, and this one fits the bill nicely. If you push down on the figure's feet, his right arm goes up and "slashes" his weapon. If you're using the alternate accessories, he can also raise lightning at people. It's pretty swell to play with it, and the head sculpts are both pretty good. Just remember if you get this one, it's an action figure-- the sculpt is nice, but it's meant to be played with. This is somewhat amusing because the figure was the result of a running change which came out of Lucas re-editing the film-- the very first figures have Anakin's blue lightsaber, while the standard release had a red lightsaber (also with Anakin's hilt). Some later releases dropped this weapon because, obviously, he should be holding his own weapon based on how the film was edited. I would classify this figure as fun and worth owning, but due to all the rereleases, collectors are probably sick of it by now.

Collector's Notes: The first release had a blue lightsaber, which was "corrected" to red-- it's still an incorrect sculpt. The figure also appeared in a Battle Pack (with a modified hand and accessory), and in Target's Order 66 packs-- which is technically wrong because it had the "normal" head and not the "Sith" one. Ah well. It's still a nice figure.